So far, not bad

It’s been a roller-coaster week, one that started well, suddenly dropped low at the middle, then rose back to the better by the weekend.  The gravity driving the ride was a hard disk crash on my laptop and a two-month old backup.

Yes, I should have a more recent one, and why didn’t I have an automatic cloud-backup system in place.  I’d tried various services without success. The were always too slow, too expensive, too big a drain on internet bandwidth and processing power.  I’d settled onto a local ‘sync to removable hard drive’ solution, but keep the drive at home and was apart from it during my Christmas travels.

No, it’s not a good excuse.  Just the reality.

I taught my Medical Devices class up at Cambridge on Monday and Tuesday, a really interesting group of students with a lot of exciting ideas.  We had good discussions in class about product ideas and how to develop them, long conversations over dinner about how to organize and finance businesses. It was delightful.  I enjoyed the early walks across the Fens and the late beers working in the Commons room at Wolfson.

On Tuesday evening, I headed back to Sandbanks, the computer unsuccessfully moving files around in the back seat.  I thought it was just taking longer than normal because of some background process, but the hard drive had a scratch somewhere and oxide flecks were being spread across the disk.  By evening, the computer could no longer boot into Windows.

Discouragement sets in: I have long conversations with people about whether justice requires just desserts, or whether there is a philosophical difference between regret and remorse.  I begin waking at 4 am again.

In the morning, I took my laptop to Bournemouth IT Solutions, where they confirmed that the drive needed major resuscitation.  Putting new brains and heart into the husk of the laptop would take days and cost almost as much as a new one.  So, off to the Curry-Mega-Super-Store to replace the dead unit.

For me, buying a new computer starts with size: big enough to see (>12”) and small enough to carry (<15”).  I’m ready to buy into Win 8.1, and want enough cores, memory, disk space, and graphics to handle it.  I don’t want to spend a fortune that I don’t have.

After a couple of hours trying out the choices, I settled on an HP Pavilion (on special) and carted it back to the loft.  Two days of setup and configuration followed, installing updates, downloading software, restoring backups and mail.  I was able to start doing productive work the first evening, and was more or less fully functional by Friday.

Happily, this afternoon, Bournemouth IT called to say that most of my user files seemed intact, but that the D-Drive was trashed.  That meant loss of pictures from November and December, but they are hopeful of recovering some of that.  Fingers crossed.

And, in synchrony with good news, the world generally looked better as the week ended.  The company continue to show good progress.  I made it to exercise three days in a row and read most of a book while doing so.  The weather has been fair, absent large windstorms or severe cold snaps.

All I really need is a new cloud backup solution to prevent this sort of data loss ever again.

Posted by Dave Hampton at 10:26 PM No comments: Links to this post

A key cultural test of expat acclimatization has been whether I can seamlessly navigate everyday social situations.   Should I shake hands, hug or kiss when meeting someone.  Can I ask what people do, of do I have to guess from clues in their conversation?  When speaking about the weather, can I complain about it?  Is “Are you Okay?” different from “Are you Alright?”  And what do I do when I give someone a choice and they answer “I don’t mind”?

I think that I (usually) know the answers to all of these questions (and their Dutch equivalents).  But there have been some good articles written recently that can give the newly-perplexed a push in the right direction.

‘And a few weekend photos around Sandbanks where I stroll whilst thinking about such things...

Closings: I tend to sign off casual correspondence with ‘best wishes’: it warms a business letter and reassures a casual friend.  I would never, ever use it with anyone close to me (British friends say that it’s a very pointed insult if used with anyone you’ve ever known well).  Sarah Britten wrote a guide to the varieties of closings: I have to admit that I’ve switched to ‘Best Regards’ after reading it.

Greetings:  I struggle with the variations on greetings: three pecks in the Netherlands, two in the UK,sometimes with a colleague, never with a boss. Lucy Kellaway wrote about the need for a single Universal Greeting that business people could use with confidence across cultures.  I still vote for the simple handshake, one hand over-clasp if it’s a warm friend (but never reach up to their elbow).  Beyond that…I’m just not the huggy sort whenI’m in business attire, sorry. 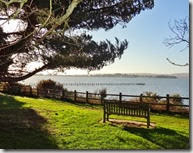 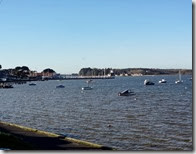 Apologizing: I am convinced that the British have two ways to say “I’m sorry”. One is an actual apology, which tends to be remorseful, single-syllable, sincere.  David Mitchell suggests that Life goes much more smoothly when everyone's saying sorry.  Perhaps. For I also hear a rising, two-syllable, ironic “sor-ree” when I accidently turn in front of someone at the grocery.  It’s a honked horn: politely, definitely critical.

Criticizing:  In a word, don’t.  I may not like the condition of the trains, accept the scarcity of snack crackers, nor enjoy the crowds at half-term holidays, but I am a guest on someone else’s home turf.  Toni Hargis gets it exactly right: I can be self-deprecating about your homeland, but it’s best to be accepting of my residential country. I came, after all, in search of the differences,not to change everyone else.

Posted by Dave Hampton at 10:26 PM No comments: Links to this post