Life in the UK (reprise)

I passed my Life in the UK test!

This has not been an easy adventure.  The book is dense with information, and the practice tests indicate that the questions require memorizing tiny scraps of information buried in individual sentences.

(Try it for yourself here or here: it takes a score of 75 to pass, I generally got 92 or better)

I created a spreadsheet of key dates, memorized population every 50 years from 1600 onwards, drilled on lists of poets, sports figures, and scientists.  I know the dynasties, the wars, the battlefields, the Union and Reform Acts.

Each evening, I went down to the pub, drew a single pint, sat on the terrace, and drilled with the w.wezen by phone.  Distinctions blurred: Who used Proportional selection vs First-past-the-post (AM vs MP); What happened in 1215 vs. 1314 (Magna Carta and Bannockburn)).

I started to waver, confidence ebbing…

This morning, I was on the road at 6 am to the testing enntre at Eastleigh, stopping only to sketch a diagram of English History from memory, then drill on Authors works and Olympic athletes.  Head filled, I joined a half dozen others tight-lipped aspirants in the county building.

Everyone on staff was very friendly and encouraging, especially to those repeating for a second or third time.  IDs were checked, residence verified, and we had a quick scan for any electronic devices.  We were each assigned to a computer and given a quick practice test.  Then, off we went: 45 minutes to answer 24 multiple choice questions.

I was done in 5 minutes, yet was the 4th to finish.

The test was easier than expected: heavier on judicial questions, lighter on history than expected.  I only hesitated on a question about individual registration for electoral roles (only required in Ireland) and whether

police complaints must be made to the Chief Constable in writing (credible, but unlikely).

Otherwise, my study had prepared me for knowing the distinction between Great Britain and the United Kingdom (Ireland), England’s official flower (rose), and the attackers of 1588 (the Spanish armada).

Another wait and I reached my exit interview: the computer said that I passed (without telling me my score: the clerk was apologetic about not being able to say which , if any, questions I’d missed). There was a printed, stamped, signed certificate and a handshake, a big smile.  On the way out, I donated my book to others who might need it: it seemed a fitting conclusion to pass along a bit of (heavily annotated) luck.

In the end, it as ass much a test of desire and belief as of facts and customs.  Would I put in the work to learn the material; would I accept this version of history and culture?  (The US, for example, doesn’t figure at all in British versions of WWI or WWII.)

The qualification gives me the right to seek Indefinite Leave to Remain (ILR) or Dual Citizenship, ‘next stop is my immigration advisor and to see if we can get this done.

But if really feels good to have this one over.

Posted by Dave Hampton at 6:57 PM No comments: Links to this post 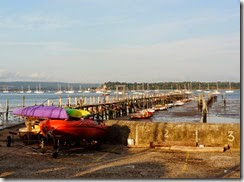 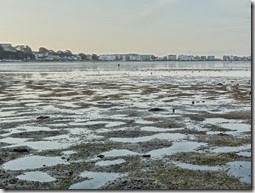 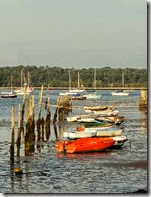 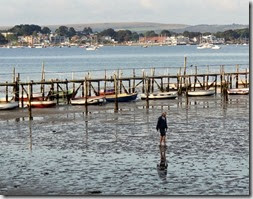 Posted by Dave Hampton at 8:00 PM No comments: Links to this post 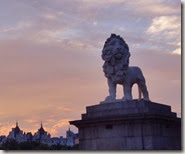 It’s a warm and clear evening in the City, the sunset glinting off of the landmarks along the Thames.  A few scenes after a bit of Turkish fare and a slow stroll along Southbank in the warm summer evening (uncharacteristically contemplative instead of snapping pictures constantly). 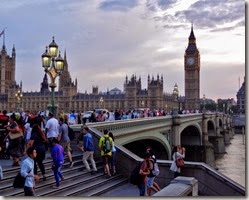 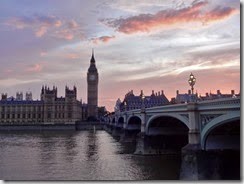 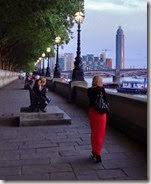 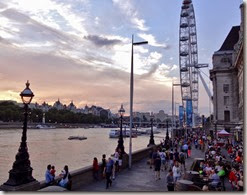 Posted by Dave Hampton at 7:03 PM No comments: Links to this post