I didn’t think it had gotten so cold overnight: we’re just into October and most leaves are still in the trees.  But there were remnants of ice on the windshield when I went to the shop.  The skies were gun-metal blue, low mist and clouds on the horizon.  The sun was just rising orange against the hills to the north.

I changed direction: A wander down along the peninsula might turn up some good light, or a good spot for a coffee to watch the early traffic out of the harbor. 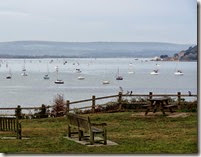 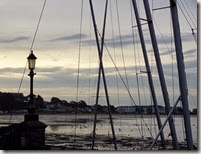 It was nice: the boats along Sandbanks were nicely stranded in the mud and the water was still along the docks.  The joggers rattled past me, while Channel Ferry glided through in the distance. 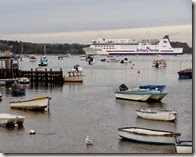 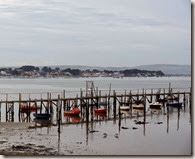 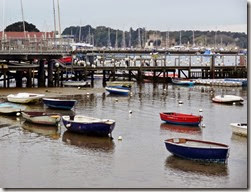 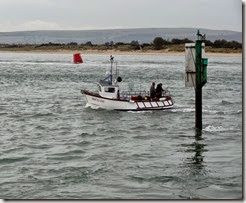 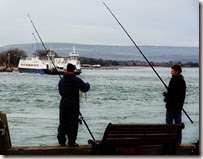 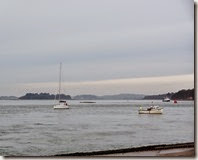 ‘one of those mornings that it would be really nice to be out on a sailboat again, pulling on gloves and hats, getting the rigging set, sorting through the day’s cruise details.

I found myself looking at the clouds, gauging wind and weather. Definitely a bite to the morning, a shift in the wind, for those heading out. I’d be looking for shelter by nightfall.

Posted by Dave Hampton at 9:56 PM No comments: 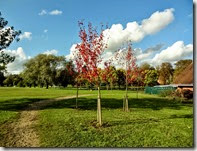 ‘last meeting over, headed back from the Thames to the Bournemouth coast to get the weekend rolling. 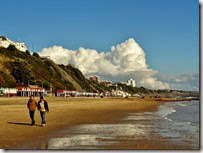 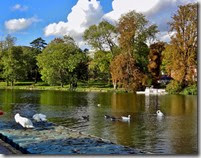 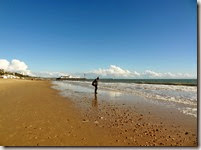 Posted by Dave Hampton at 9:40 PM No comments:

Lunch among the arts

It was cold  and spitting rain as I pulled into Basingstoke, my usual jumping-off point for trains to London.  The drive up from the coast was quicker than expected, despite the rain, and I connected with the fast train north waiting at the platform, arriving hours early for my meetings.

‘so, with time to spare for some art!

I always like the challenge of the Whitechapel Gallery, generally in-my-face provocative, somewhere between ‘horrors’ and ‘make-me-smile’.

I wandered over for a look, but they are currently between shows, so there was only a gigantic stack of books arranged by French-Algerian sculptor Kadir Attia, Light of Jacob’s Ladder (I could not see the imagery in it that

the Guardian found).  Upstairs, a collection of sculpted figures was arranged across a wooden platform – the perspectives were interesting, but nothing cohesive in the group.

‘better next time, when there’s a show on.

I moved on across town to the Tate; it’s still wonderful to be able to wander in

any time to see the current exhibitions as a Member.  The Turbine Hall has sprouted a gigantic wing by postminimalist artist Richard Tuttle (The full exhibit doesn’t open for a few days).  The background notes say that his representations should evoke feelings from the character of the materials, more than from the object being depicted. While the textiles accent the sculpture, it’s hard to tell if it’s being constructed or deconstructed.  But in size alone, the work is an ironic departure for an artist known for smaller, much more intimate works.

I went on to visit the collected paintings of Kazimir Malevich, a Russian artist who used geometric forms, squares and circles with a limited palette of grey and brown colours. Again, the background notes say that he was minimalist, trying to evoke sensations in the observer without any reference to external objects.  In this way, he differs from Kandinsky, who used a similar geometry as symbolism for real things.

Malevich began as a figurative painter, though, and I liked the bold colour and simplicity of his works at the exhibit’s start (texting madly to an artist-friend who agreed throughout). 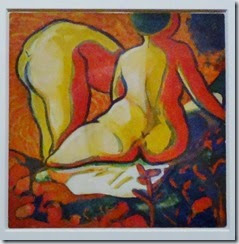 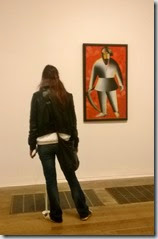 Mid-exhibit, Malevich had evolved into painting cubist works that were fascinating to try to sort out (Morning in the Village after Snowstorm, left, and Lady in Tram, right). 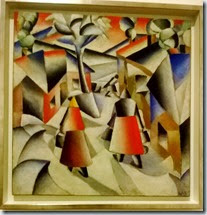 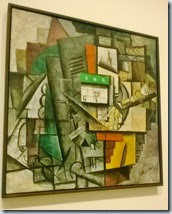 His work becomes progressively more spare after that, culminating in his most famous painting, The Black Square.  Flat and featureless, the canvas simply draws you into it, evoking both possibility and dread in my mind.  Critics debate it’s meaning and significance, whether it’s even art.  The controversy, as the painting, is intriguing.

Malevich kept repeating the geometric motif in various forms over subsequent years, the works becoming repetitive and less interesting, before he stopped altogether. (I gave up on the last third as well.) 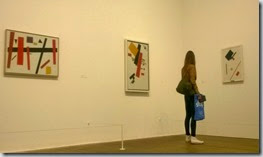 After the stark tour of abstraction, it was nice to take a tea out onto the balcony and refresh in the light, colour, and detail of reality, the early afternoon drift of water and clouds through London. 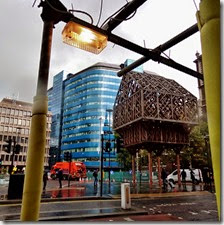 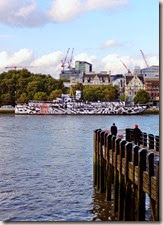 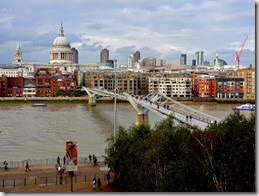 3 pm:  I headed towards the conference center.  The meetings went well, and, afterwards, the trains were on time.The drive south was quiet and thoughtful, the roads clear and wet, glistening with leaves.

Posted by Dave Hampton at 10:49 AM No comments:

Along the Thames walk 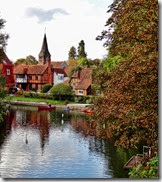 Autumn has thudded into northern Europe this weekend: grey skies and rain, dark until 7 am and cold at noon.  It’s sudden, last week I was enjoying coffee and conversation in shirtsleeves at Branksome Beach, now it’s a hearty pasta casserole out of the oven.  I’ve started dreaming of half-term trips to warmer climates and got bookings in over the weekend – ‘better to have something tangible to look forward to than to sigh over the changing seasons.

We’re in a particularly intense period of work at the moment, fundraising and preproduction, clinical trials and commercial agreements.  It’s keeping me pinned to the desk working the phones and emails for long days, most weekdays.

I still get up (too) early to do the household things, get out to shop and exercise midafternoon, spend time writing friends and cooking in the evenings, but it’s really not the change of scenery that my mind and body need to stay healthy.

Enter the weekend, and the Thames Path.

The Path is a national trail, extending from the Cotswalds to Greenwich along the Thames River.  ‘mostly flat and meandering from village to village, it scenic and not too challenging, a great way to find pubs, watch boats, and enjoy the changing colours in the trees and skies. 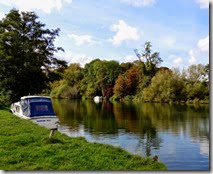 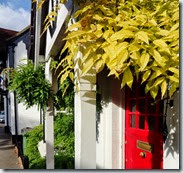 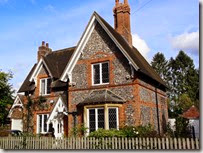 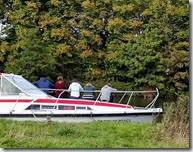 Conversations often meander like the path, a discussion of ‘wizened’ (‘creased with laugh and wisdom lines’ or ‘wrinkled, shrunken, and desiccated’)

or ‘resilience’ (better to be able to bounce back by virtue of experience, positive attitude, and problem-solving ability, or to arrange a ‘peaceful’ life so that there’s less need to call upon it?).

Other times it might be speculation on whether UK license plate numbers have any meaning (they do, but the Dutch don’t) or why we embrace end-item-testing in education (comprehensive exams) when most production systems  have abandoned it as a way of ensuring quality.

The walks have only been along short sections or the Path and are apt to wander off into churchyards and side roads if the mood strikes.

And they invariably lead, not to attainment of a waypoint, but to a sit by the river and a shared drink and nibble, watching the boats and swans, speculating about the people at the next table.

The right tonic for a busy week, passed, and to mark the passing season.

Posted by Dave Hampton at 10:40 PM No comments: