You can tell I'm headed back…. 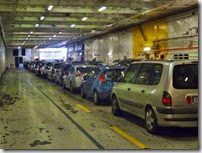 …because I'm pointed the other way, as Snoopy observed from atop his doghouse.  I do it from within a ferry, but the idea is the same.

Its been a good week but a lot of road time.  A few days in Maastricht, followed by a long drive to Munich for a day of meetings, then another day’s journey back.

The discussions were good, and we enjoyed some seasonal Bavarian beers and cuisine to celebrate progress.  Oktoberfest was just finished, so harvest soups and immense slabs of beef were on the menu. 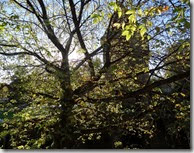 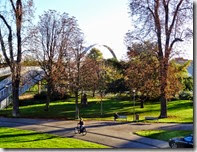 Germany was rainy and cool, typical fall weather, and the traffic was typically fast and aggressive.  There is still more construction per linear kilometer along the autobahn’s than anywhere else I go.  The worst seemed to be around Stuttgart: the ring road was clogged with accidents, and the

short-cuts through the city followed steep and narrow roads.

Levity came from the mural in a restroom half way back.  Otherwise, I tunneled into podcasts and ruminated through the miles. 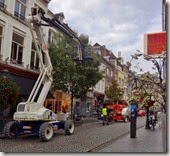 In Maastricht, the Christmas lights were going up as the leaves were coming down.  I finished my VAT reporting, worked the fundraising, and caught up with friends.

The ferry back was considerably quieter than the ride over.  The boat was filled with school groups, all taking pictures.  The difference was the near-maniacal focus on individual and group selfies.

I take a lot of pictures, but most are outwardly directed, thinking of light, composition, and the feeling of the moment.

Scenery is backdrop for them: it’s a completely different way of seeing the world.

Posted by Dave Hampton at 11:33 PM No comments: Links to this post

The opposite of victim

Beneath the crime story in Gone Girl is an exploration of power balances within relationships.  An outwardly respectable marriage hides the underlying struggle going on, the alternating roles of victim and aggressor, the way each manipulates the other in order to dominate the couple.

I don’t believe that this dynamic is as strong or as universal as Joshua Rothman writes in the New Yorker.   I’ve always been a believer in (if not always a good practitioner of) equality and balance in relationships.

But his essay is provocative, especially in the way he defines losers as victims.  They aren’t always so.

What is a victim?  For me, it is someone who suffers, whether from physical, emotional, or social pain.  I also associate victims with injustice, implying a cause behind their anguish.  When another person is at fault, we have lot of words to describe them: aggressor, persecutor, oppressor.

But consider everyday suffering, perhaps caused by natural events, disease, or accident.  Perhaps a friend or partner has been misunderstood, has failed to act, or is unaware of what they have caused.  The pain could be entirely in the victims own head, with an external focus that is not actually the cause.

We still think of these people as victims.  They have the same need for acceptance and support from those around them.   And, often, their pain has a cause, even if an innocent one.

What word do we have for an innocent agent that causes suffering?  They aren’t naturally an aggressor?

Is ‘victim’ even the right word for suffering that is unintentionally inflicted?

I don’t think that we have words for that pairing, and I can’t think of a good one.  Sometimes the Dutch see things more clearly, but their words, slachtoffer/dader, also pair victim with perpetrator.  It’s almost as if the two roles form an inevitable dual, where the existence of either one necessarily implies the existence of the other.

The drama thus plays out once a rescuer enters the mix, with default construction of a ‘Power Triangle’ (Karpman 1968).  Characterizing the sufferer as a Victim, the comforter as a Rescuer, can result in the unjust demonization of  the person seen to be at fault.  This casts unwitting bystanders into willful roles, framing their (in)actions as intent, neglect, and (for Nature) Acts of God.

The novel and movie play with our sense of who is the victim, who is the aggressor.   I wouldn’t hesitate to apply the word dader to people who inflict willful suffering onto others by intention or abuse, without guilt, regret or remorse.

But, in real life, when suffering people are cast as victims, however well-intended, there are consequences.  Comfort leads to rescue, balance to identifying a cause, and justice to a judgment.

And, too often,  that can create more victims.

Perhaps only for lack of a word?

Posted by Dave Hampton at 1:49 PM No comments: Links to this post

We’ll have gale conditions for the crossing, the Captain rasped over the ferry’s loudspeakers, followed by a list of precautions.  I eyed the waves breaking over the Dover seawall and gauged the wind-driven heel of boats entering the harbour.  Not a pleasant trip, but warm enough that I could enjoy the view from the deck. 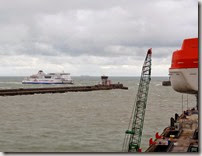 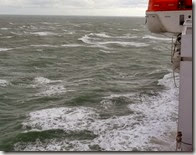 It’s always impressive to see the crew get a boat that large spun out of dock and off into the Channel.  The British watch working sailors the way the Dutch watch river management, clustered along the upper rails,pointing and critiquing.  The ferry slid sideways, turned upwind for a boat length, then ran downwind through the gap to the open sea.

The wind rose, the boat pitched: we were off. 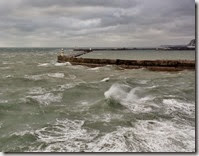 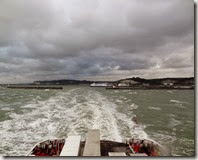 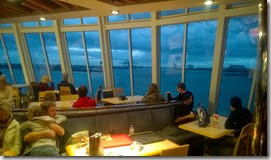 Apart from the cruise, it was a pretty easy jump to Maastricht.  And it was nice to be back among my things again, especially since the repair work on the front walls had been completed.  New paint, clean fabrics, shiny windows: Bionda and her friends did  lovely job on the clean-up.

Life was looking up – I went downstairs for a biertje (herfst bok) to celebrate. 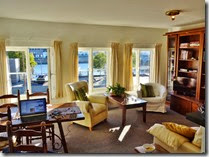 I was up early this morning, picked up bread and milk, stumbled across the set of Flikken Maastricht, filming behind the old city wall

‘pretty fun to see the cast putting a scene together. 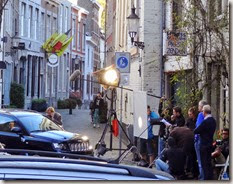 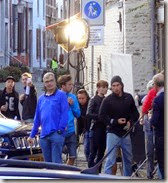 It was a warm autumn day, the light was perfect, the fall colours in full display along the river.

I lingered an hour before getting down to work. 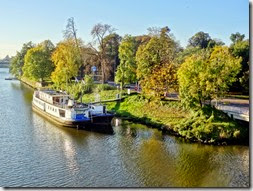 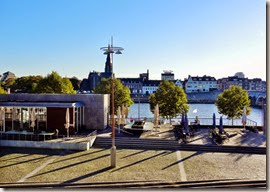 Posted by Dave Hampton at 9:49 PM No comments: Links to this post

A dart in a map

Abbotsbury?  I frowned, running a finger down a list of bistro’s and galleries.  At least a few were open on a Sunday, and I jotted down a couple of post codes.  A bit off the path, but not that far a drive. The map showed a village straddling the winding coast road, a few clustered buildings.  The weather forecast was for increasing wind and rain all along the Heritage Coast as a warm front blew in from the southwest. 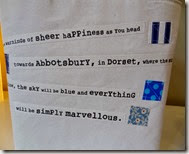 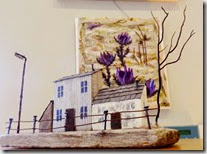 I tossed in the walking sticks and a jumper, eased the car out of the Lilac Court and spun west.  TomTom chirped happily at being on the road again.

It’s been a nice weekend so far.   I’ve been catching up with the house and shopping, reading and cooking (plum-ginger duck from the butcher).  The Shrink and Sage are debating whether Life’s Options Should Remain Open (How can you give yourself to one life when lots of different ones are out there waiting to be explored?). 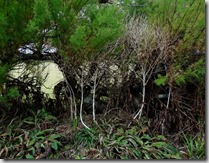 It brings back rueful thoughts: I have a lot of hard-learned ripostes to ward off that past temptation.

The Amazing Race punted through Oxford on Friday.  Closer to home, there’s steady progress in the business, better family medical and job news to celebrate.  My half-term flights and bookings are finally sorted for the first real vacation in well over a year.   A lovely seafood restaurant in old town Poole proved perfect for marking life’s waypoints.

Still, I rose too early for Sunday morning, restless and ruminating.  I drove down to  the waterfront to catch the morning light and fresh-baked croissants.

I knew that work would take the day if I

didn’t leave my desk and get out of the house.

Where is there art and food west of Weymouth? 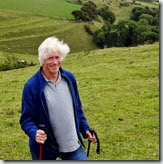 It’s an interesting suggestion: the South West Coast Path meanders through literary Chesil Beach and up into the hills above Fleets Lagoon, a vast tidal inlet bordering the coast from Weymouth. Scenic, at least.

But, on arrival, those higher reaches were absolutely howling wind, hair pretty much blowing sideways off my head.  Lively and fun: the views were spectacular and there were few other early autumn walkers to disturb the ambience (and the sheep). 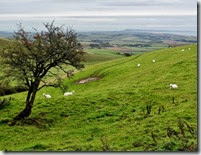 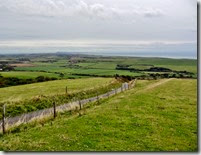 Abbotsbury proved to be a small stone village, nestled in a hollow about a half-mile from the sea.  There was a charming tea café, soups and cakes, and some good works by local artists (Joan Scott and Debbie Vietch, left and right below). 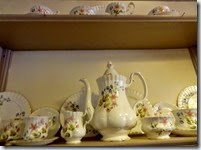 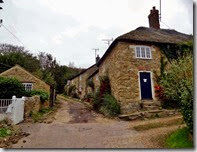 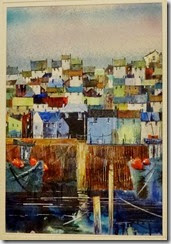 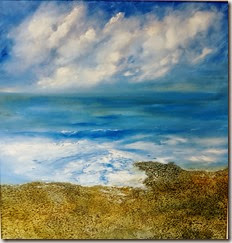 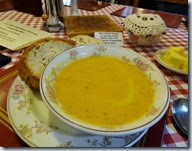 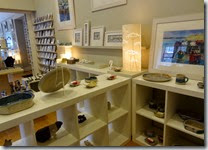 I’ve always aspired to being able to do a watercolour landscape, or pen and wash, like these.  ‘maybe when I catch up with the Peaceful Life one of these days (cue my friends’ giggles).

Chesil Beach lies about a mile from town, again along the South West Coast Path.  More protected from the wind, it took about 45 minutes to get to the ‘beach’, which turned out to be entirely made of red gravel, flanked by a huge berm.  It’s a scramble to get to the top, but the red-orange textures against the blue sea match the artists depictions.

Thomas Hardy called it Deadman’s Bay: it’s been the site of many shipwrecks over the centuries, boats caught among the shifting pebbles.  But the novel, The Well-Beloved, is more philosophical and tender: it spins the story of Jocelyn Pierston, a sculptor obsessed with possessing the transcendent beauty he believes lie in both love and art.  He never attains his heart’s desire, unable to find perfection in stone or flesh.

But he does stand at the same spot:

To the left of them the sky was streaked like a fan with the lighthouse rays, and under their front, at periods of a quarter of a minute, there arose a deep, hollow stroke like the single beat of a drum, the intervals being filled with a long-drawn rattling, as of bones between huge canine jaws. It came from the vast concave of Deadman's Bay, rising and falling against the pebble dyke. 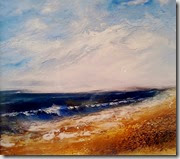 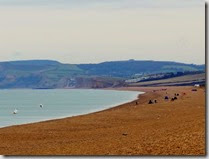 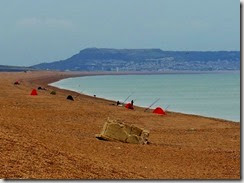 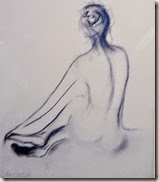 Viewed from the berm, as Hardy saw it, the cove is likely much as its always been: fishermen and walkers and the wind along the hills.  Seacoast overlaid, now, with creative art, romantic literature, historic Abbotsbury.

Posted by Dave Hampton at 12:52 PM No comments: Links to this post