The black ice is finally off the E40, the major highway across northern Belgium.  It was time to head back to England, back from Carnival, back to fundraising.  The drive to the ferry at Dunkerque was familiar, skirting again the two dominant cities in Flanders: Bruges and Ghent.

Both were major centers for trade in woolens in the Middle Ages, both suffered in the sixteenth century from wars and declining political and economic influence as power shifted east to the Brabant (the cities of Brussels and Antwerp).

I like both, perhaps giving an edge for Ghent with its picturesque central harbour and trio of church steeples.  Ahead of schedule, I pulled in for a walk and a lunch.

For me, Ghent is water: connected to the Western Scheldt bay by the Ghent-Terneuzen Canal.   This feeds waterways throughout the city (rather than around it, as with Bruges), and I particularly like the Leie river tributaries that meander through the town center.  A waterside café, Falstaff, under a blanket with a bier and a tagliatelle is a nice break, with canals and castles nearby. 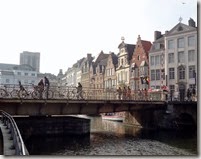 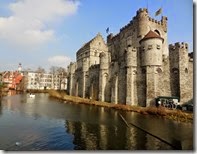 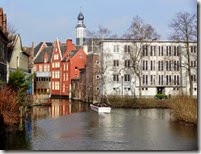 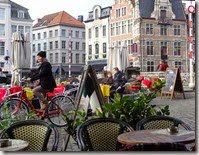 My other landmark is the three church towers aligned along Cataloniestraat:  Sint-Niklaaskerk (left, below), Het Belfort van Gent (the Belfry, a watchtower), and Sint-Baafskathedraal (both right, below).  Here, I have a preference for Saint Nick (interior pictures, below), more intimate and interesting. 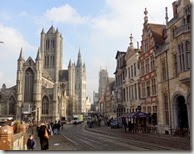 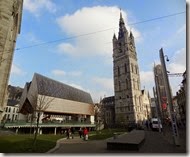 From there, another hour’s drive to the ferry and a late afternoon crossing back to Dover.

‘would be nice to linger, but its an aspirational goal for now.

Email ThisBlogThis!Share to TwitterShare to FacebookShare to Pinterest
Labels: Belgium