Modernity at the ‘Modern

Challenging artworks by two women are exhibited along Southbank this month; a frigid day along the Thames made good excuse to study their perspectives.  Both artists deal with the modernity: what does it mean to be a person living in modern times?

The Sinca podcast explored the theme from the standpoint of non-western culture, and the social disorientation and economic dislocations that struck middle- and far-eastern empires when confronted with western colonial powers.  Their analysis describes the conflict between retaining traditions and assimilating benefits of modern society.  For example, does accepting the Internet, as a practical tool, also force adoption of non-traditional ideals such as free speech and critical thought?

For me, the Tate Modern show reflected the more organic question of how those within a society change as modernity arrives and different perspectives on community and identity are needed.  How do traditional ideas of self and society change when confronted with rapid technical and economic change, and how do artists capture that spirit? 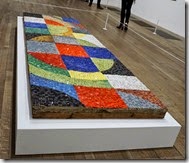 Sonia Delaunay takes the more benign approach, embracing the ways that urbanity, technology, and travel changed Paris in the early 20th century.  From experiments with figurative painting and abstraction, she moved on to a synthesis based on color and contrast, attempting to capture an interplay of people, lights, and motion (simultanism).  Below, Le Bal Bullier depicts tango dancers amidst ballroom lights, Electric Prism the streetlights reflected from rainy pavements, Portuguese Market the fruits and vendors. 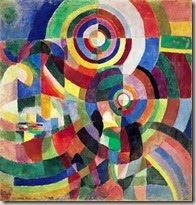 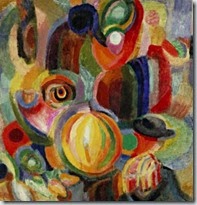 It’s a neat synthesis of concrete figure and abstract mosaic.  Unlike Kandinsky, she doesn’t attach symbolic meaning to the works, but remains practical, exploring contrasts of color and shape even as she ventured into fashion and advertising.  Ultimately, her vision of modernity is warm, vibrant, and playful. 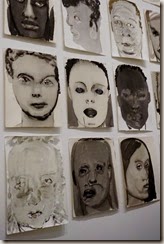 Marlene Dumas is the more challenging: her works depict haunted faces and disturbed torsos.  Rejects are not pictures of injured bodies…although the rough and careless handling they have taken gives them an ‘abused’ touch.  Black inks and runny watercolour create grotesque and frightened people, confrontational and direct. 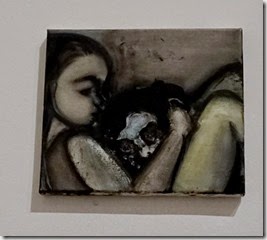 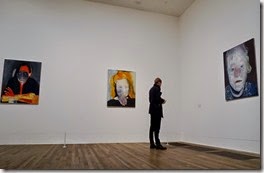 On viewing, I feel like am encountering those excluded by society, their unacceptable acts, hidden shames and suffering.  Recent works veer towards victims of war and terrorism, not overtly political but viscerally intense.  Her vision of the modern is bleak and alienated, of people living at the edges of society and compromised by it.

PS: The list of ‘d’ words describing the Dumas inks and paintings, so far suggested by readers, includes:

…and many thanks to my w.wezen for the new Tate pass!