…loving Bossche Bols; living remarkably in the Netherlands has been the tag line of this chronicle since its inception.  The Bol defined Dutchness for me in the beginning, as I moved to Arnhem and took up work in 2007.

A most delightful bakery lay just around the corner from my apartment and, once each week, I would pick up the chocolate cannonball and take it home to carve

up with friends.  The Bossche Bol weighs in at over  600 cal per 140g portion, putting it into Bacon-XL-Double-Cheeseburger territory. 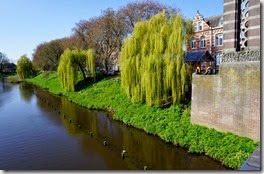 The pastry originates from the city of ’s-Hertogenbosch, located midway between Utrecht and Eindhoven in south-central Netherlands.  Central ‘den Bosch is a medieval fortress surrounded by river and parks (the name literally means ‘The Dukes Forest’).  Founded in 1185, it’s the birthplace of painter Hieronymus Bosch (of course, his statue oversees the Markt Square, far left of the picture below) and sometimes-home to mapmaker Gerardus Mercator. 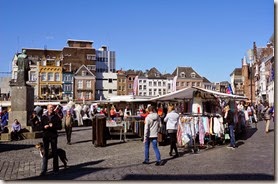 The Bosche Bol arrived here in the 1890’s as a custard-filled chocolate pastry made by Bakker Lambermont.  It took present form in the 1920’s when Henri van der Zijde created a cream-filled version, much like a super-sized profiterole.  Jan de Groot created the definitive recipe in 1936 and the family restaurant still survives, making trademarked Echte Bossche Bol (and a chocolaty Bosschebol liqueur) using a secret recipe.

I made time enough today for an hour’s reunion with my old friend, settling into Jan de Groot’s outdoor terrace in the warm spring sunshine.

Around me, the market bustled with stands selling flowers, cheeses, fish, and, of course, baked goods.

The city’s signature dragons gleamed and glowered from nearby plinths and gables;  rich coffee and rapid conversations flowed around me (a fair amount understood). 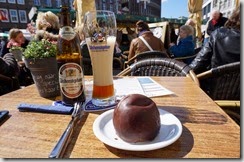 I ordered a classic echte bol, accompanied by rich dark biertje and a Panini Parisian, and indulged. 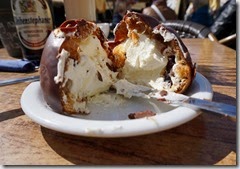 Email ThisBlogThis!Share to TwitterShare to FacebookShare to Pinterest
Labels: Bossche Bol, Everyday life in the Netherlands