A month of travel and change

I am always surprised at how quickly circumstances can change.  At the end of May, the immediate environment seemed stable and future prospects were good.  The businesses were reaching long-established goals and I was looking forward to having a week back in Maastricht to sort the car and the mail, visit a couple of mooie dorpen, and catch up with disconnected friends.

All of that went into reverse on the way to Dover Ferry Terminal.  The phone rang, the news broke, and I turned back west.  36 hours later, I was on a plane to the US,  offline for the next two weeks.

The flow follows its own channel.

On returning to the UK, the house was in turmoil.  The kids had broken up, Greek Mom was quitting her job, and the whole group was making sudden plans to return to Greece.

‘Perhaps good to wait the currency crisis out? I suggested.

όχι: an emphatic No that foreshadowed the vote.  They were packed and gone within days.

The house has reverted to quiet, emptiness, with just the  cardiologist there when she’s not traveling.

During the days, I plunge into work and travel to meetings.  I delivered a pitch to the Kent Investors Network

at the Medway Yacht Club, a personally aspirational venue.   It lies on the River Medway, nine miles off the Thames across from the historic Chatham Dockyards.  I’ve marked the spot for a future visit, then rambled the banks for a couple of hours taking in the tideflats and sailboats as I practiced my delivery.

I visited Cambridge as well, celebrating the MBE class graduation with a wonderful dinner at Clare Hall.  The conversations and speeches were fun and insightful as always.  It’s good to meet colleagues and to share stories and contacts ahead of  the summer breaks.

Weekends were spent traveling as well, sometimes across Poole Swanage and Sandbanks, other times in

The Tate Modern is presenting geometric works by Agnes Martin, a New Mexico-based abstractionist.  While the colors were reminiscent of the vivid desert hues in Santa Fe / O’Keefe works, the representations were finely detailed parallel lines and grids.  Neither mosaic puzzles nor moire hallucinations, it was hard to find significance or meaning.  I only offer respect that someone put that much effort into achieving that precision in their drafting.

Time would be better spent among the Hepworth sculptures across the river.

The summer crowds are arriving in Dorset, filling the choice bluffs, café’s, beaches (and parking).  Not one to compete with that at midday, I’ve begun to take mornings along the water with coffee and a cake. 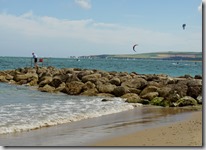 It took a few weeks before I had the heart to pick up the camera and my #100HappyDays project on Instagram.  But I’m back to posting two a day, if only to remind myself how the vistas across water and rocks, sailboats and sunsets, remain constant, lovely, and familiar alongside life’s unpredictable story.