The wind was blowing hard Saturday evening, whipping stinging sand across my face and arms.  The low sun turned the dunes orange, throwing sawgrass shadows across their tops.  Sailboats and ferries crossed the blue channel of the harbour entrance, Old Harry Rocks in the distance.  A group of teens tended their fire pit and drank cheap beer in a hollow, shadowed from the elements.

I sat, cross legged, on the crest and surveyed the peaked tents and broad arena below.  I’d expected that Beach Polo was a cross between Volleyball and Water Polo, but there were no nets or goals deployed.

There were, instead, Ponies and a lot of well-heeled spectators.  A big orange ball, lots of mallets, flying hooves and sand, lots of cheers and oohs from the stands. 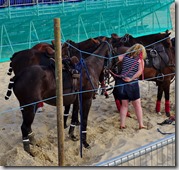 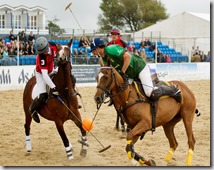 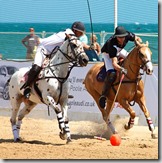 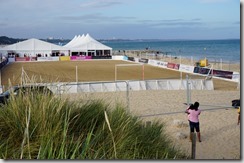 The event is detailed at the British Beach Polo site.  The spectator-level pictures, above, are from promotional sites: I was too far away to get good detail.  Tickets ranged from £25 (General 1-Day) to £60 (Extended, Beach after-party), and it looks like it could be an intriguing novelty that might be good fun next year. 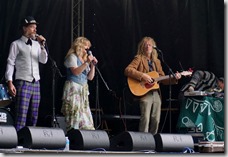 Sunday began drizzly and grey after a restless night, then deteriorated onwards.  I was, nonetheless, determined to attend the Grooves on the Green music event in Ashley Park.  It was a bit desultory on arrival: a couple of bands playing to a dozen or so people, food and drink vendors looking damp and forlorn.  Children jumped in puddles (the bouncy-slide was closed down), trying to splash parents huddled beneath bright umbrellas.

The planners had tried to work up a tropical theme for the Calling Stage and novelty groups like Funkathon (with the big hair, below).  The main stage struggled with transitions between larger, more polished acts.

It was the exact opposite to the sunny Sandbanks Beach event of the prior evening, but more congenial (and better beer).