Last year, our challenge was to get into the Facebook Album.  This year, it was more about enjoying music, food and conversation.  The Food and Drink Festival was back in town.

Summer gets into gear in England in July and August.  The roads clog with cars (queues), the beaches fill to overflowing (heaving), and I start looking for street parties (fêtes). 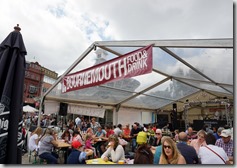 It’s fun, a chance to visit market towns across the South West, with a familiar cast of vendors (Marshwood Vale Cider Company) and the occasional charming local tradition (’barrow races).

Although the w.wezen suggests that I’m FOMO-tivated by the What’s On calendar, I prefer to think it’s an escape from the week’s work and a relaxed afternoon out.

The B-F&D draws around 40 cooking tents serving everything from pasta to paella, venison to tapas, pulled pork to polenta.  The quality is generally pretty high, and the prices around £5 per plate, similar to the Taste Of… American equivalents.

The strategy is to pick up a couple of samplers and camp out in the beer tent, where we munch through cooking demos, people watch, and listen to live music.

Alongside, there’s the new Seafront to explore, a multi-million pound renovation of the approach to the landmark Pier.  I was particularly looking forward to the sub-project that was to reunite the town’s river with the sea.

The winding river though the city park had stopped just short of  the beaches, diving underground at the concrete apron of the promenade.  This was to have been resurfaced and

Disappointingly, it all turns out to be virtual reality.  A winding line of fountains now  marks the river’s course, and copper fish are impressed into the concrete.  It’s all a bit understated (underwhelming), although the children seem to love it.