Evenings along the beaches

Summer evenings, especially when the skies glow late accompanied by warm offshore breezes, draw people in toward the beaches.  I know the signs, traffic backed up around the circles and into neighboring seaside communities of Bournemouth, Sandbanks, Branksome.  Congestion forces many to give up, leaving them to crowd the outdoor terraces and gardens of Parkstone and Westbourne.

But locals know where street parking can be found, along East Cliff or Canford Cliffs.

They know the short walks to the high bluffs overlooking the Channel, where the Isle of Wight and Old Harry’s Rocks glow orange and pink at the horizon.

They know the bet paths down to the beaches, and the trails that meander through the low brush and grasses to the Pier approaches. 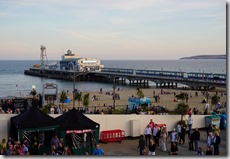 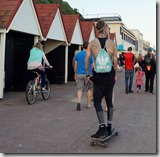 In summer there is music in the parks and pavilions, ice cream vendors against the beach huts, and families clustered tight about charcoal grills, beer bottles clutched close keeping watch on their chicken and burgers.

The clouds  illuminate yellow from above, then red from the below, as the sun sets.  Garish animated signs illuminate  the public areas, while and soft lanterns mark the paths that weave between them. 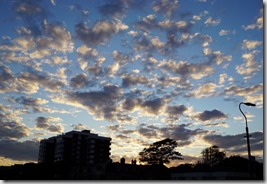 A relaxed younger crowd strolls, holding hands, studying one another, back and forth between venues.

The older folks sit alongside windscreens in beach chairs, watching the waves change colour through the evening and reading the newspaper.

It all has the nostalgic air of carnival evenings in the suburban parks outside Chicago, neon lit vendors above food and laughter.  It’s a relaxing and comfortable time, good for a contemplative stroll or just to shed the day’s work.