I can smell the sea…. 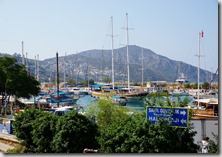 The plane landed only ten minutes late after a four hour flight from London; everyone stretched then wandered, sleepily, into the warm dry night of Dalaman.  We’d arrived at the Turquoise Coast of Turkey.

Dalaman is a jumping-off point for destinations to the southeast: Fethiye, Oludeniz, Kalkan, Kas.  It sounds incredibly exotic to American ears: I wouldn’t have a guess as to what this arid, mountainous region of southeast Turkey might be like.  Recent violence along the Syrian border to the east gave me a moment’s hesitation the past week, but I realized that I was sounding like my European friends who wonder whether a shooting in Chicago is relevant to their trip to LA.

I’d arranged for a driver to take us the hundred miles of coast road to the resort town of Kalkan. 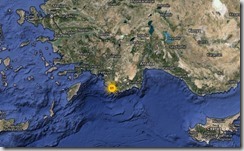 On the map, right, Kalkan yellow dot at the southwest corner of the country along the ancient Lycian coast.  Rhodes lies just offshore, southwest, Cyprus southeast, Istanbul north.  The other major resort towns, Fethiya and Kas, lie to either side less than an hour’s drive each way.

The highway was new and relatively untraveled, we made good time repeatedly bobbing up into the mountains then down into beach communities.  One stop at a roadside stand for beer and baklava, my first Efes Pilsener at half the price of a British tap.  My kind of holiday, already.

Kalkan is a  resort community nestled in a steep, hollow cove along the Mediterranean Sea.  The focus is the harbour, a slot filled with white sailboats and wooden gulets.  The town  rises steeply from the docks, a row of restaurants and bars, then a step up to another, and again, and again.  The steep trails and narrow streets would become a nightly challenge, stomachs full of excellent food and drink burdening a step-by-step climb to the villa.  But the slope also afforded wonderful views, golden mornings and purple sunsets across the broad curving bay.

The driver dropped us just above the lower part of town, and helped with getting things down to the rented apartment.  A collection of cats patrolled the terrace, waiting for a chance to come inside.  The night air, midnight, was warm, dry, scented with flowering bougainvillea.  The villa turned out well: clean, modern, well-stocked. 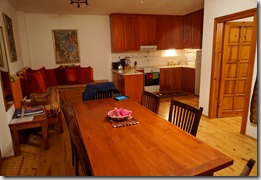 It seemed unlikely that we’d find much, but we walked down to see where the town might be.  It wasn’t far; we could smell the sea in a couple of blocks and the next turn was into a welcoming road decked with multicoloured lights: restaurants, lounges, and markets, all bustling, filled, and happy.

It was enchanting – the way every vacation should begin….

Email ThisBlogThis!Share to TwitterShare to FacebookShare to Pinterest
Labels: Turkey