Tokyo: In one day… 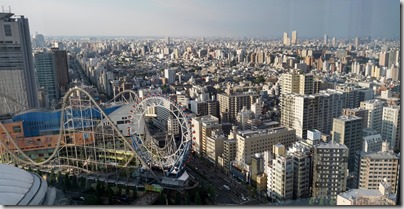 I arranged to stay an extra day in Japan after our business ended.  It is a long trip and a great opportunity, and I wanted time to immerse in more traditional culture and wander the city independently.  But how much can anyone reasonably do in a city of 13 million people in twelve hours?

The first decision was whether to stay in Tokyo or take a train to someplace smaller.  Friends provided me with a really good guide, and the travel was very reasonably priced.  But spending hours on a train was less appealing than hours immersed in the streets: I decided to stay within the city.  Frommers suggested an ideal one-day Tokyo itinerary, and I adapted my plans from Arthur’s template.

I also relocated to a hotel near the Ueno Station.  It’s more city-central, good for its proximity both to Ueno Park and to trains for Narita airport.  Accommodation prices were reasonable; lots of shops and restaurants lay in easy walking distance. 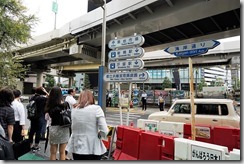 Once planned and positioned, I headed into the subway, then a winding walk through roadworks, to make the 9 am opening of Hama-rikyu Gardens.  These are absolutely gorgeous: broad grasslands and reflecting ponds, delicate flowers and puffy evergreens.  The highlights and variations of light across the trees, dwarfed by hazy blue buildings, is lovely.  Traditional lacquered tea houses and wooden bridges dot the park, geometrical precision nestled into the rolling foliage.  I spent two hours walking the paths and reading the stories. The best are the 300-year-old pine, bent and rambling, and the ancient stone quays that hosted supply ships and visiting dignitaries in Imperial times. 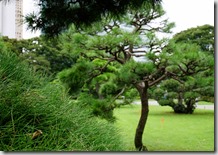 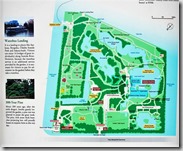 Cruises leave from the edge of the garden to motor up the Sumida River to Asakusa, the traditional entertainment  district.  The salt waterway used to be where Tokyo met the sea, now it is landfill sectioned by colourful bridges and rimmed by cliffs of apartment buildings.  The 45 minute trip is nice for being on a boat and watching the city scroll past, thought-provoking for the dense sprawl and upward growth everywhere. I ended up reflecting about how societies balance their desire to become ‘modern’ in the western sense yet still retain traditional artifacts and unique traditions.  I almost missed my stop, at the base of the SkyTree.

The Sensoji Temple complex is a few blocks from the landing.  Founded in A.D. 628 to house the Buddhist goddess of mercy and happiness, it consists of a half-dozen temples set among gardens, inscribed stones, and bronze statuary.  Crowded with both tourists and parishioners, there’s both tension and balance in competing commercial and spiritual roles of the site.  I seek the latter, reading the inscribed supplications, joining the incense, taking a quiet sit in the temple courtyards. 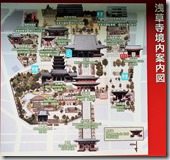 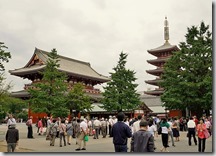 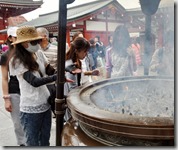 Surrounding the temples is Nakamise Dori, endless alleyways of small tourist shops and restaurants.  I sampled the cutout pancakes filled with chocolate, bought some small traditional souvenirs, and searched for Pokemon gear requested by my daughter (the fad looks thoroughly dead, replaced by Transformers and Hello Kitty). 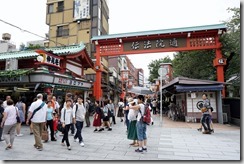 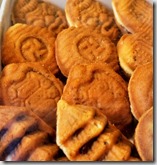 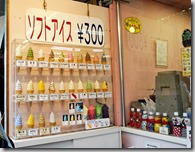 I broke with the travel guide to walk a couple of miles back to Uedo Park.  The French call it flâneur, a casual wander “amid the ebb and flow of movement” in a city.  It was unhurried, a chance to step into a street shrine, to sidestep delivery trucks, to visit a small hardware store, to wonder about the profusion of electrical and telephone wires overhead.  There are relatively frequent bilingual signs and maps so no real danger of getting lost, and people were gentle and smiling about pointing the way if I asked. 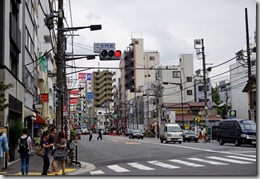 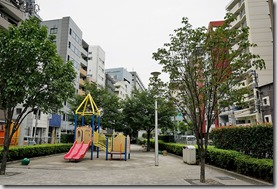 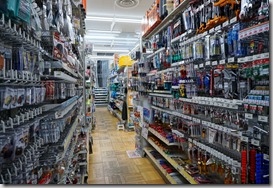 I wrapped the day with a wander among the swan boats floating in the Ueno Pond and dinner in a all-you-can eat and drink shabu shabu bar near the station.  3000 yen (20 euros) buys 100 minutes at the buffet, with two broths, four meats, and bottomless beer and sake.  It’s a light meal resembling fondue; at the end, noodles are cooked in the broth to make a final soup. 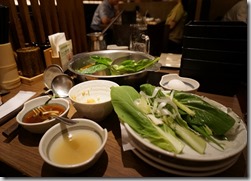