Winding along the Vecht 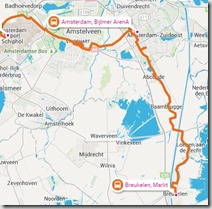 ‘up and on my way early to Schiphol airport (AMS) for a mid-afternoon flight back to the UK.  I was meeting a friend at 7:30, so ik word wakker at  5:30 and ben op weg at 7:00.  My suitcase clatttered over the over the cobbles to the station, I paused for the occasional picture of the rising sun behind the gebouwen in de Wijk.

I’m going to miss this, although it felt like an odd visit.  The occasional connection to old friends, the neighborhood changes since April, questions of ‘how to live’ now that I’m making organizational and lifestyle adjustments, all throw doubt around how long I’ll stay along the Maas.  The restaurant is successful enough to expand to the 1st floor apartment, so mine is the only residence left in the building. 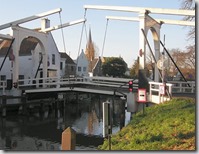 With a couple of hours to spare until I needed to arrive at Schiphol, I started thinking about which mooie dorpen to visit on the way north.  Breukelen (rhymes with Brooklyn, from which the New York borough derived it’s name, meaning ‘broken land’) was an obvious choice.   It was once the royal place for Amsterdam’s traders to live, and their mansions remain set into the lush green forests and gardens along the Vecht river.

The quaint village has views along the river and the Loosdrechtse Plassen, a lake bordered by serrated shorelines (and the village of Scheendijk) where peat  once was harvested.  There’s a notable Dutch bridge and a bustling market in the town center, perfect for losing myself for an hour.

And then the rains came. 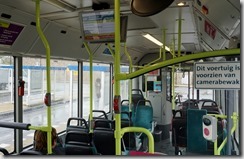 Unfortunately this forced me onto a bus to reach town, running every half hour to match the trains.  It was otherwise a 2 km walk.  There was no way to catch the bus, spend an hour, and get back to the station in time to catch my plane.

Studying the maps, though, I found that the 120 bus traveled from the station all the way to Amsterdam Bijlmar ArenA, the home of the Ajax football team and on the direct line to Schiphol.  One hour travel time, a meandering track along the estates along the river and a string of small villages.

It was a plan.

Torrential rain prevented photography, and I really needed longer to linger, hopping on and off the bus.   But it’s a wonderful ride, with lots to see along the way.   The route passes mansions and gardens, winds between canals along either side, and crosses through beautiful small villages, café’s and shops.

It would be even better by bike, and I’ve marked the route for a future sunny day with more time to explore.   The only change that I might make is to bail at th4e Holendrecht Train Station, about 3/4 of the way along.  From there, the bus travels through industrial parks with striking modern architecture, but the best part is the earliest part.