Around the southern Peak District 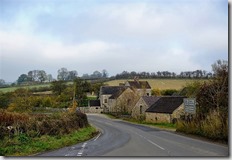 The lower portion of the Peak District National Park is less rugged than the dark, moor-ish north.  It’s mostly farms, forests, and villages, better suited to eating and browsing.  All routes from Buxton lead through Bakewell, where the ranger could recommend loops and villages.

The weather had deteriorated further, cold rain and fog.  No point in scaling the heights again, so we meandered through towns and turn-outs.

One highlight was Chesterfield, a venerable market town best know for the Crooked Spire atop the parish church.  The story goes that the tower was built from green wood, which sagged as it dried.  Another blames the tens of tons of lead applied to coat the spire.  It seems stable, if alarmingly offset, one of four similar spires in the UK (compared with 65 in France and 22 in Germany).

In any case, it makes for lovely pictures. 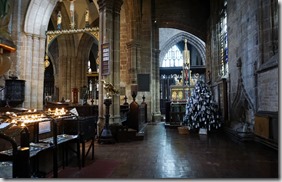 Otherwise, it was an afternoon of driving east-west through the hills.  We forded a flooded road, explored the not-quite-a-village of Tissington, played a game of skittles with locals in the pub (pitching big wooden balls at a diamond of pins). 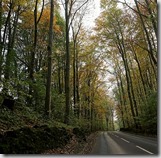 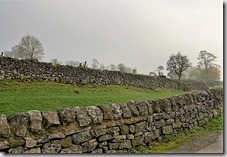 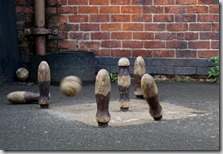 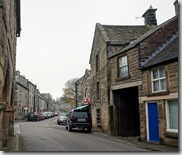 It’s all sort of bucolic and peaceful, a nice weekend’s change from the busy-ness of London and points south.  On a return, I’d likely head further north to hike the moors and peaks, but return south for dinner and telling stories.