Winding down the week

‘back in Poole, I took a walk along the beaches, the winter chill finally starting to warm.  While things are not advancing as quickly as I might like, they are grinding ahead and the season is turning more hopeful.  Plans, products, investors, and resources are all converging positively: while it feels like I should do this more easily after thirty years in the business, I’m still learning new things each day that are improving our progress.

Following on the heels of the FCC decision to regulate Internet providers as a utility, the NY Times ran an article describing the Dutch experience with similar legislation.  While acknowledging that the Netherlands is a smaller place than the US, the effect of Neutrality has not been constraining on the ISPs.  The greater factor in determining quality of service seems to be competition.  If the Free Market folks would limit the monopoly power of Comcast et. al, then the US might achieve the level of service that the Netherlands enjoys.

Instead, my right-wing friends maintain The US government, given the time and resources, will screw it up for all.  With a Republican Congress?

The FT ran a nice commentary on the difference between Unicorns and Zebras, the ones with billion-dollar floats vs .the ones that only go on to establish successful businesses.  Any startup that achieves revenue and profitability is a rarity, and all achieving that milestone should be supported and celebrated.

I’ve been listening to the Startup Podcast, a narrative eavesdrop on the entrepreneurial journey.  Developing a pitch, dividing shares among founders, what shoes to wear to a meeting: its all there.  But he dos it so badly, so naively.  I find myself giving his pitch, telling him what he percentages should be…it’s a measure of how far I’ve come in five years.

‘and a delightful account of Senior Nomads in the NY Times: a 60-ish couple who have spent the last two years living a week at a time in AirBnBs across Europe.  I went onto their blog and found a lot of expat experiences that resonated with me.

We have a better understanding of the world and just what it takes to get by in life and still be comfortable. We have slowed down and enjoyed each day as it comes.

We will keep doing this as long as we haven't run out of money, stopped having fun, or fallen over and can't get up.

So far so good!

Posted by Dave Hampton at 11:41 PM No comments: Links to this post

Overseas visitors seeking to work, study or attend business meetings in the UK would have to demonstrate they respected “British values”, under proposals to make this commitment an integral part of any visa application.  -- FT.com

Oh dear…and just when the Life in the UK test was finally behind me.

Immigration is a difficult and contentious topic across Europe, as it is in the US.  The arguments for importing skilled talent and enhancing social diversity are well described by businesses and civic leaders.  But the reality seems different for native citizens, who must grapple with how to honor traditions and maintain fairness despite demographic change and economic austerity.  Migrant cultures seem to challenge rather than enrich established neighborhoods, to compete for jobs rather than create them.

Politicians have responded by building barriers (reducing non-EU net inward migration) and enforcing assimilation (promoting a simple code that all can readily accept).  In 2014, the UK government suggested that, in addition to speaking English and mastering history and politics, a British values requirement would be adopted.  This would  assure that migrants respected ‘democracy, the rule of law, individual liberty, and mutual respect and tolerance of those with different faiths and beliefs’.  We’ve already been talking about how to test for it.

After all, these aren’t qualities that can be put into a multiple choice test, or captured through interviews or role playing.  It asks how applicants live their lives. 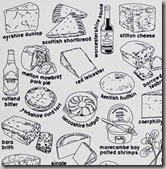 It may be that regular meetings with a caseworker or sponsorship by a neighbor may be required to establish a fit.

Hopefully, there won’t be a skills test of preparing proper meals (battered fish), knowing the first thing to do on arrival in a new place (boil water for tea), or giving the correct greeting (‘You all right?’).

I’m smiling inwardly as I remember how long it took before those British elements became second nature.  And that alongside a whole different set of language, cultural and social rules that I needed to learn in the Netherlands.

The Netherlands is actually 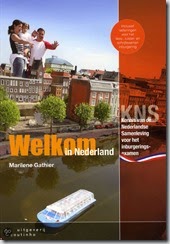 further down the road to assessing ‘values’ among immigrants.   My Dutch civics program tested to the ‘Red Book’, Welkom in Nederland.

And, since 2014, immigrants must sign a ‘participation statement’ acknowledging their understanding of Dutch values and their individual responsibility to contribute to society.

None of this need be a bad thing: it could be a sign that immigration is evolving from an exclusionary device to an inclusionary one.

Interestingly, then, conservative values testing satisfies a liberal purpose.  ‘Passing’ is not simply a reward for having achieved full integration; it is also a means to assist in reaching that goal.

Citizenship has previously been a simple instrument of migration control; passports are a device to regulate who enters and leaves physical territories.  In a sense, it is an international filing system, a mechanism for allocating persons to states.

But new changes in citizenship policy alter this definition.

New requirements balance out previous liberalization that has given more people access to citizenship without accompanying obligations of membership. Requirements also infuse new content into traditional national membership, emphasizing a universal not particularistic set of skills and values. Finally, civic integration requirements modify citizenship from an exclusionary device to an instrument of inclusion.

Posted by Dave Hampton at 9:36 PM No comments: Links to this post

I’ve been busy with business, travel, and a couple of days break for the past ten days.  Everything is good: we’re making solid progress towards finishing the fundraising, I’ve re-written and road-tested the new business plans, and we continue to get good results from our product testing.  We’ll see our way through this.

I needed to make a business trip up to Amsterdam to close out 2014 with my accountants, and  that opened an opportunity to spend some time in Maastricht for Carnival.  It was good fun, colorful costumes, and te veel biertjes, along with a chance to revisit Brugge and Ghent.

Writing and Skype suffered as a result, but I’ll catch up in the coming week.  As always, thanks to those who wrote to ask the what’s, where’s, and when’s of my absence.

Posted by Dave Hampton at 9:52 PM No comments: Links to this post

The festivals seem to pile up this month.  It’s a good thing: by February, winter’s chill has settled into me as surely as ice between the cobbles in Maastricht.  Absent travel to a warmer port, any excuse for a drink, a dance, and a smile is worth a lot.  A birthday celebration in the City offered an afternoon to explore Chinatown, where the New Year celebrations were in full swing.

The Year of the Sheep augers gentle calm beauty, right?

Fortune in all aspects will fluctuate. So, in career, stick with the current job and work hard. In wealth, be very cautious about any investment or there would be a loss. In relationships, be tolerant of family, friends

and colleagues to avoid any conflict.

Expect Good luck and Bad, coming in pairs with wild swings in either direction.

Sounds like lots of abuse to look forward to…  ‘Makes me glad that I already saw 50 Shades (it well exceeded my low expectations).

In any case, the streets near Leicester Square were filled with food stalls and dancers.  Small fireworks popped along the sidewalks; children waved toys and flags: we nibbled spring rolls and bean buns and squeezed through the narrow streets looking for outsized paper dragons.

I’m used to chasing fanciful apparitions, after all. 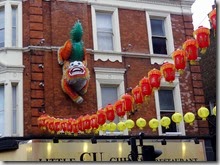 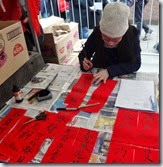 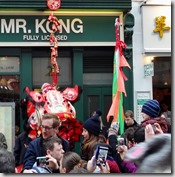 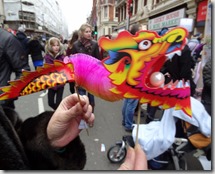 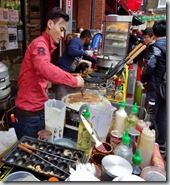 By mid-afternoon, a cold rain began and the paper lanterns started to melt.  Misty grey shades settled in.  ‘A good time to take refuge in a pub, then a gallery, out of the wind and warming the spirits. 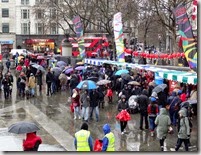 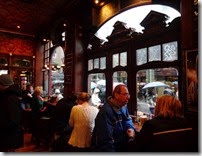 Posted by Dave Hampton at 8:16 PM No comments: Links to this post