Summer weekends mean village faires in regional celebrations throughout the UK (and likely Europe),.   The Dorset Food and Venison festival was the first off 2015, featuring the traditional mix of food and garden booths, live music, children’s games, mud and Wellies.  We drove out to the meadowed village of Lytchett Minster, a low-lying farmland dotted with manor houses and art academies just northwest of Poole.  The event ranged across a fenced field surrounding a central maypole, individual and group tents beneath chilly grey skies. 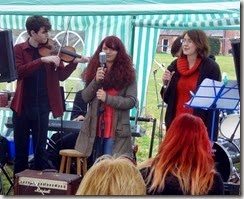 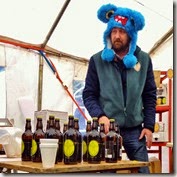 The highlight of the affair was expected to be deer meat, and it exceeded expectation in one direction, missed in another.   There was more carving of raw deer going on around the grounds than I had ever seen.  Butchers waved knives and hacksaws, gave away or auctioned the cuts to a wincing and silent crowd. 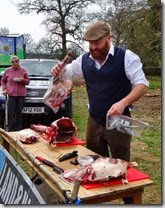 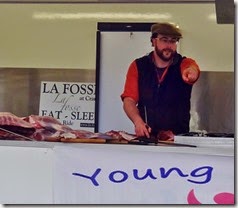 At the same time, there was little actual cooking and eating of the food.  The four food tents ran out of venison two hours into the event, with only the vegetarian and alcoholic alternatives remaining open.  Ironically for a meat festival, I only ate falafel.

I was eying the llamas in the petting zoo, hoping that we might sacrifice a couple to keep everyone fed. 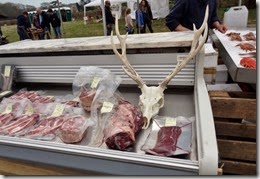 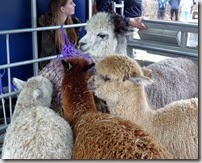 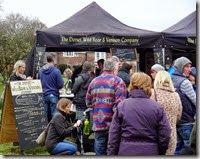 Hazard management signs were most 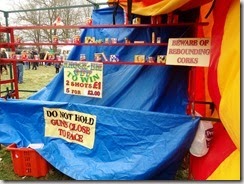 prominent instructing children at the target shoot.  Unfortunately, the real hazard was not errant corks, but the wind blowing down the tent.  The manager sweetly offered the children their money back if they would not shoot at the people exposed behind the ruined stand. 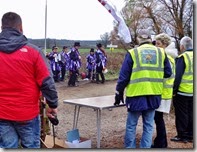 On the positive side, a roving band of Morris Dancers were kept outside of the grounds for most of the afternoon (If UKIP’s Nigel Ferage were to fulminate against Morris Dancers as he does against immigrants, he might gain my vote…).

However, they were permitted to enter to run a MayPole dance mid-afternoon in brisk winds.  Children marched in concentric opposing circles, struggling to maintain even spacing (“If the pole is toppling, you are doing it wrong….”). 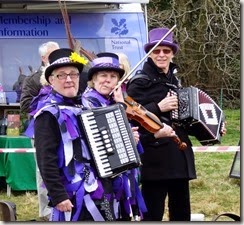 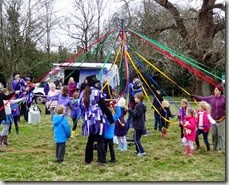 But it was all good fun, well attended, and nice to revisit with familiar cider-sellers that we’d come to know last summer.  ‘and lots  of season still to come.

Posted by Dave Hampton at 10:00 PM No comments: Links to this post

The big spring holidays are swinging into motion in Europe, with a four-day weekend and Easter holidays starting Friday.  The Tube is full of schoolkids, excited in a half-dozen languages;  Piccadilly Circus overflows with groups jostling for the best selfie.

Over at St. James Church, the cherry blossoms are out.  Our CEO visited Tokyo’s gardens last week, sending back lovely pictures.   Friends in Japan are also starting to share compositions. For me, the flowering trees in London, Cambridge, and Poole will comprise the displays this year. 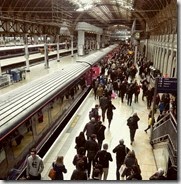 Tuesday:  I’m feeling like Tokyo as well, on the early train into London for meetings .  The presentations are going better now that I have finished product to show and revenue plans to promote.  But it’s still a long day on the hustling's, ending at 6 pm, wearily dodging the holiday throngs.

‘Time out for balans en grenzen, leavening work with reward.

The Easter displays are brightly lit as darkness falls outside Fortnum and Mason.   The store glows bright daffodil-chick yellow; gigantic chocolate eggs and molded bunnies grace every table.  Larger items cost upwards of £100, but there are stacks of hand-painted boxes inlaid with rose and violet infused puur chocolate flowers that are perfect for giving.

And so I shall 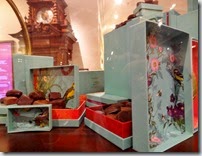 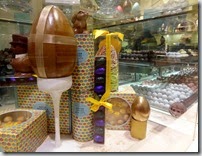 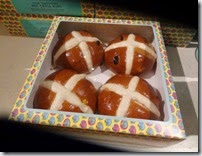 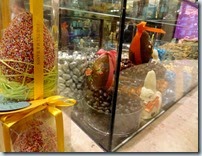 Posted by Dave Hampton at 7:03 PM No comments: Links to this post

Email ThisBlogThis!Share to TwitterShare to FacebookShare to Pinterest
Labels: Holidays and Events 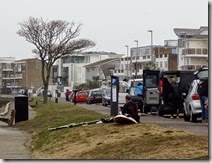 The spring storms are starting to arrive from the southwest, sweeping across Dorset and delighting the watersports people.  Poole Harbour is always home to a variety of wind-sailors, board-paddlers, and dinghy-pilots, but the kite surfers are the most exciting to watch

They always look like they are  skimming right to the edge of disaster, but folks who love it say it’s a simple and forgiving skill.  Unlike a sport parachute, there are no vents to open or close.  Instead, surfers spill air right/left to turn, up/down for velocity.  The tug is fairly constant in force and direction, and balance isn’t much harder than waterskiing.

A good blow last weekend was a chance to sit along Sandbanks peninsula and enjoy the show.  You can judge how easy it is:

Or, for the more idyllically inclined, check out the sport, same location on a sunny day, from the kite’s perspective.

Posted by Dave Hampton at 12:37 PM No comments: Links to this post

Antony Gormley tries to decipher the meaning of being alive using the body as a guide.  Grief, for example,is symbolized in this sculpture, Loss.   “Art confronts life,”, he explains, “allowing life to stop and perhaps change direction.”   It’s an interesting thought: How would life change if the body altered rather than the circumstances, adding a capability rather than a choice.

Perhaps mind-reading?  We try to do it all the time, interpreting the tics and tells of peoples faces and fingers to guess their truthfulness or intent.  Let’s simply go to the source.

But imagine all the awful things you’d have to know about everyone…   Okay, then dial it back to something less involuntary, more Mel Gibson (What Women Want) than Charles Xavier.  Imagine being able to reach in specifically to answer a question or to retrieve a moment?

Then you are burdened with the responsibility of acting morally from that knowledge…   It’s too easy to solve it by granting a power to control minds.  So what if it were a choice between reading or manipulating minds, between knowing without being able to act, or acting without really knowing?

There’s more potential for selfish mischief in the latter, but  but both powers seem undesirable on reflection.

What about invisibility?   Its safe and comfortable, and avoids the  knowing / acting conundrum.  Only useful to get away from something, or to get away with something, sniffs the New Yorker.  Another essayist holds that the true power of invisibility is simply freedom from judgment: emancipation from the world’s perpetual, foreboding, nit-picky, relentless condemnation. But as a reality?

Tina Harper writes that women over 50 are already rendered invisible through social indifference.  When the radiologist no longer asks if there’s any chance you’re pregnant. When the cashier at the movie theater, glancing indifferently at your gray roots, suggests you might want the senior discount (years before you might qualify). When people in the subway don’t really look at you as they politely offer you a seat.

For men of the same age, it’s loss of power.  Invisibility means no longer being vital or important to others, respected as leaders, or sought as advisors.  Again, the small cuts matter: the phone stops ringing, emails stop accumulating, invitations stop arriving.

Invisibility is already something I avoid, would I really want more?

What would be your favored superpower? In comics, male heroes seem born with strength, speed, flight, invulnerability,  while female heroes acquire truth-telling ropes,  impenetrable shields, and instant invisibility.  The nature of these powers and of how they are acquired, even whether they are difficult to control, seems embarrassingly gender-specific.  And the comics always show powers to be double-edged, exacting a price and changing the person bearer in unpredictable ways.

Besides, John Jantsch suggests that everyone already has at least one superpower.  If you really take the time to think about your greatest strength or quality—be it resourcefulness or creativity or logic or intuition—and apply it every day to what you do, you'll at the very least be staying true to who you are and letting that guide you. 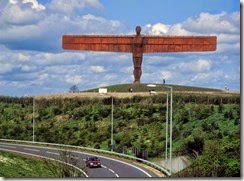 Antony Gormley suggested similar ideas when he created the super-sized sculpture, Angel of the North, near Newcastle.  “No-one has ever seen an Angel and we need to keep imagining them,” he says. “The Angel has three functions - firstly a historic one, secondly to grasp hold of the future, and lastly to be a focus for our hopes and fears…. I wanted to make an object that would be a focus of hope at a painful time of transition.”

Symbolic of the true superpower of being able to find the places, organizations and people to whom and with whom we feel most and fully vital and alive.

Posted by Dave Hampton at 5:32 PM No comments: Links to this post

Getting to know the neighbors 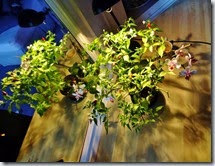 British friends have been working on my use of emotive words.  ‘Sad’ means distressed, ‘Concerned’ translates as very worried, ‘disappointed’ as deeply hurt.  Whatever impact I think a word has, it amps up considerably when heard by British (and some Dutch) ears.

If I want to put stress onto a feeling, I tend to add great or really.  Locally, though, ‘Great’ is an eyeroll at the end of the sentence (“I’m serving raw liver tonight,”  Great.) and ‘Really’ is an eyebrow raise (“I like raw liver,”  Really?).  These intents also hold as adjectives, so That’s a great idea! and I’d really like that! carry ironic rather than enthusiastic meanings.

The learning curve will be similar with my new Greek housemates. 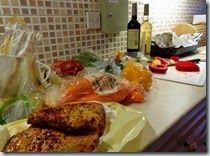 Emily the ballet dancer and Adonis the chef (every 61-year-old needs a pair like this) arrived Thursday, quickly settling into the Lemon Room across the hall.  They cook together in a local restaurant significantly elevating the kitchen smells at dinnertime here in Parkstone.  ‘not a lot of English, so communication includes enough gestures and smiles to see us through getting to know one another’s backgrounds, schedules, and habits.

I drove them in to work this morning along the way to pick up bread and batteries in Lilliput: it was spitting rain and everyone was a bit pressed because the clocks jumped ahead.  The Quay was dotted with early morning joggers and rowers, the historic inns and warehouses bolted against the wind, boats silent;y bobbing at dock nearby.

‘Quay’, of course, is pronounced key along this coast, and I took an early walk beneath the grey skies, Unsettled in the words of the Met Office, who add that heavy rain and coastal gales are expected shortly.

Posted by Dave Hampton at 1:16 PM No comments: Links to this post