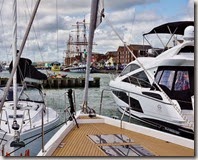 The house residents were up early this morning.  I’d like to think that it was sunshine, breezes, yoghurt and blueberries at the beach that motivated everyone.  But Greek-mom was working on her English, I was finishing pitch-prep, and the kids had an early shift cooking.  Only the cardiologist was sleeping in after late duty in imaging.

This really needed to change. 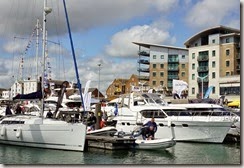 “Ready at 10,”, she offered,  continuing into a mixed language soliloquy.  In a full and happy (Greek) life, one needs regular doses of (in order of importance) relaxation, warm sun, blue water, and strong coffee.

Tik-tik-tik-tik…,” “she motioned, mimicking my heavy-handed typing and shaking her head.

I get the message. 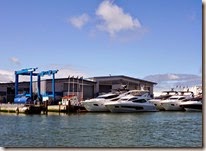 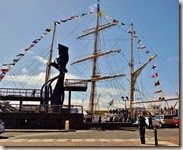 The car warmed up along with the day (although 12C-Dorset qualified as “mild winter” for the Greeks), and off we went to Poole.  The First Annual Poole Harbour Boat Show was spread across the Old Town Quay, a mix of tall ships, new motor- and sail- boats, and tents with every water-related charity imaginable. 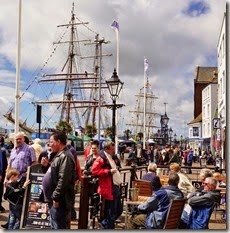 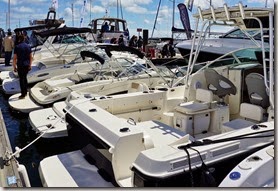 I wandered the decks of the tall ship, lusted for a 57-foot sailboat (“only £800 per day charter, Isle of Wight and back,” suggested the salesman, hopefully).

Out on the water, a group of dingy-sailors practiced figure-8’s.  The Dorset Wrecks sang a cappella sea shanties from the music stage. 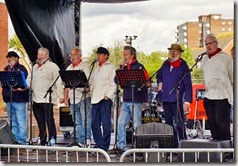 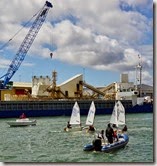 Time for a break, people-watching over thick Italian brew and sugary cakes.  Greek-mom said that one should always spend

more than 5 hours when a table and coffee are available, talking, laughing,and tanning.

I allowed half that, absorbing a mix of  Greek culture and politics, a mother’s worries about her daughter, and the (familiar) trials of residency and national insurance registration in the UK.

‘all in all, a nice event and a lovely day to (almost) be on the water.

Posted by Dave Hampton at 9:50 PM No comments: Links to this post 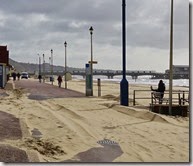 I’ve decided to change how I approach mornings.

Too often I wake with the sunrise, my head full of ruminations and worries.  Invariably I toss a bit, then read a little, finally make a pot of strong coffee and check the overnight email.  Those urgent messages become my emotional focus, coloring the start and driving the day’s plans.

‘It starts with your sleep patterns, suggests a

counselor, offering a prescription. “It starts with my bad habits,” I counter.  I’ve spent two years problem-solving, self-reflecting and adapting.  It sets a pattern, no longer a choice.

Perhaps mindfulness?  I shrug, skeptical of open awareness, instantaneous focus, non-judgmental thinking.  The practice is just wrestling with myself for control of thought and emotion.

An essay advocates conscious adoption of rituals, regular practices that connect people to things outside of themselves rather than inside.   I’m well along the 16 suggestions already, so perhaps all I need is a more forceful physical separation from the settings that feed habit’s wolves

The café up the street offers live music every Wednesday night, light organic dishes: it seems a good place to start.  I’m greeted by vegetable burgers, Dorset craft beer, and a decent guitarist, tucked into a corner amidst (and barely distinguished from) the plants.

I took my tablet, pad, and notebook along with me though.  Naturally,  I scribbled off a few thoughts and transcribed work notes while waiting for dinner.

It kind of negates the benefit.

‘Another habit to drop.

When I woke this morning, I walked

out the door (hands empty) instead of into the kitchen.  ‘East to the cliffs, then down for a long stroll among the joggers, seagulls, and dog-walkers along the Bournemouth seafront.  Building crews prepared shops for summer; waiters swept away the sand on terraces.  I cradled a camera and a cup of coffee.  I listened to the waves,  I put the workday aside to ripen a bit.

I looked for my new morning ritual.

It takes (a mythical) 21 days to form (or break) a habit.  It’s probably the same whether focused outside or inside. But this feels like a constructive step forward.

Ironically, the house-mom has been hovering worriedly as I write.  You need to be more Greek, enjoy life. Not so tense, more deep breathing, go drinking coffee by the sea.

Good advice, except that it’s followed with a smile, That’s why the Greeks are bankrupt. 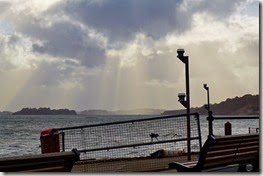 Two days of windy sou’westers have sculpted the clouds, water and sand across Poole – it feels more like March than May.

‘makes for lively strolls along the shore each evening. 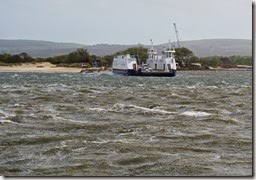 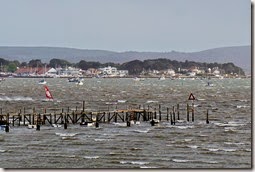 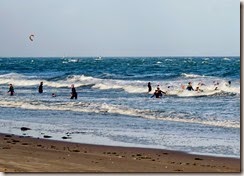 Posted by Dave Hampton at 8:48 AM No comments: Links to this post

It’s been six years since I left the corporate umbrella to live independently as an expat entrepreneur in the Netherlands. I thought, at the time, that I knew 90% of what I needed to know.  The actual figure was probably 10%.  It’s been a long learning curve (in the UK as well), and I still find that I learn something essential every day.

It’s not just the professional skills: while the columns are swapped in financial ledgers and legal procedures defy common logic, I can always hire good contract help with that.  The  activities of daily living are the tricky ones, because I don’t know that I’m doing anything wrong until the mistake is made.

In the Netherlands, ordinary garbage is disposed of by purchasing red and white collection bags from the supermarket.  These prepaid pickup units are set curbside weekly, where they disappear as the streets are being swept at sunrise.  Recyclables are taken to collection points scattered around the city: metal, plastic, paper, white and colored glass are separated and pushed down the separate openings. 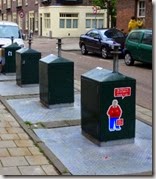 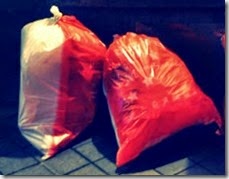 Every expat I know has at least one story where they get it wrong, bringing neighbors and landlords down on their heads.

My Dutch language exam even asked me to write a note to someone who mis-handled their garbage collection.

In the UK, things work more like the US, and life is more intuitive.

But (evidently), this is nothing like how things are done in Greece.

I returned from weekend travel to find the bins in front of the house, overflowing onto the drive.  The black garbage bin was stuffed with recycling waste; the blue recycling bin was filled with unbagged kitchen scraps.  Recyclables were mixed with garbage, and full trash bags from the kitchen floated in some liquid.

The trash men wouldn’t go near it.

With a sigh, I called an all-house meeting to discuss Proper Handling of Garbage. 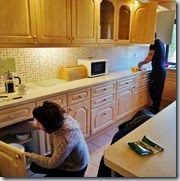 We began with a lot of smiles and ‘we need to change how we do things’ preamble.  It sets the right tone, and its also the maximum level of English that the household understands.

Second step, we discussed the Right Way To Do Things via Google Translate.  I would type instructions (English to Greek), they would ask questions (Greek to English), and we honed things down to a three-step program.

I hope that this says what I think it should.  They charmingly

printed the result and posted it on the bulletin board.

Finally, it was gloves and bags and paper towels for the Practical Exam, in the driveway sorting the bins.  There is no worse job, but everyone pitched in and we got it all sorted, bagged, and properly filed in about 20 minutes.

There was a long queue at the bathroom afterwards.

I felt like an oude bemoeial with nothing better to do.  But the bin men picked up the overflowing garbage last night, so high-fives all around and ‘back on track.

Next, we are working on getting National Insurance numbers, and on how to pronounce the sounds of the letters ‘c’ and ‘s’.

It’s the little things that count.  Lots of them.

Posted by Dave Hampton at 5:26 PM No comments: Links to this post

May Fair: Small is beautiful 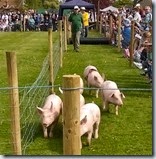 Monday is May Day, a bank holiday in a month (mid April to mid-May) that seems crowded with days off.  British friends assure me that it’s not the case, but the calendar from Easter to Half Term always seems full.

No matter: my (recent) philosophy is to take time away from work when nobody else is working.  So I scanned the What’s On pages to see what was on offer, alighting on the Bradfield Mayfayre.

May Day falls on May 1, celebrated as the traditional spring holiday in many European countries. In England, it is celebrated with community Maypole dances (more Morris), singing, games and cakes.  Since 1886, International Workers Day has coincided with the

May holiday across the Continent, and in the UK there are rallies to support working folks alongside the family fairs.

Its worth noting that the UK is proposing to move labor’s recognition to October to peg the end of tourist season, that the US celebrates (the less threateningly named) Labor Day in September, and the Dutch don’t recognize it at all (too close to the existing Queen’s King’s Day holiday).

Bradfield is a lovely village tucked into the rolling woodlands of Berkshire.  Their May Fair is a lovely jumble of country booths, food grills, charity stations, and game activities spread across the civic play fields and through the sunny afternoon.

An a cappella school choir sang Let It Go, pigs raced around the center arena, children scrambled over tractors and jumped in the Bouncy Castle.  There was climbing, art, livestock, model trains, beer and cake…a lovely mash-up of summer camp and school picnic. 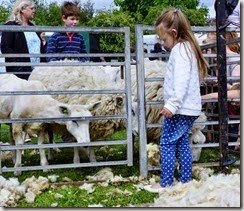 I was reminded of the Puyallup (particularly the food and pig races).  But it was all condensed down to a smaller, more local and approachable scale that I really took to.

I have long been a fan of advocates for smaller economic and social groupings (Schumacher’s Small is Beautiful and Kohr’s Breakdown of Nations).  The gatherings are more distinctive and characteristic when fit to local cultures: People matter more. 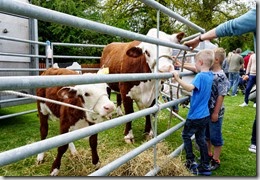 So, smaller, there were no stalls selling brand-name goods nor giant inflatable beer cans in Bradfield.

And, more beautifully, there were things from gardens, from farms, from school groups and hobbyists. 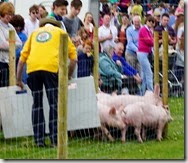 Local artists explained their techniques and created works for buyers. 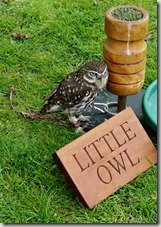 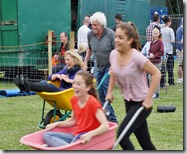 Finally, the wheelbarrow race tickled my demons: we entered and lost.

‘it was not pretty…(still somewhat small and beautiful, however)

Posted by Dave Hampton at 9:10 PM No comments: Links to this post