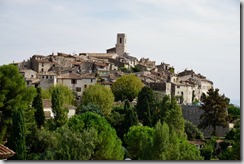 The French hilltop town of Vence lies at the intersection of art and money.  Nestled into the lightly forested hills above Nice, the climate and isolation likely drew in an artists colony.  In our geek-telling, the artists drew in girls, then galleries.  The curators drew in money, then summer homes.  The rich folk took all of the girls: the lonely artists then moved on, priced out of their lofts.  It’s the cycle of capitalism.

Begun as a castrum, a walled military defense point, the commune of St. Paul de Vence evolved from a border post (1400), to a walled medieval village 1550), the seat of the church (1660), and finally, into an artists commune (1920).  Dufy, Sinac, Matisse,; and Chagall all lived and worked here.  The Fondation Maeght opened in 1964, cementing Vence’s international reputation as a center for 20th century art.

Today, the commune is narrow walled streets, innumerable galleries, and beautiful people.  I was last in the area in the 90’s, when my teacher at Kirkland Arts Center suggested that I visit.  I was charmed by the colorful Miro sculptures dotting the gardens.  Today, the conference organizers arranged an afternoon walk through the Fondation and the village.

The Fondation is much as I remembered it, expansive views and colorful sculptures set into stone walls and reflecting gardens.  It always seems light hearted in its approach to art, playful with color and form set into the trees and ponds. 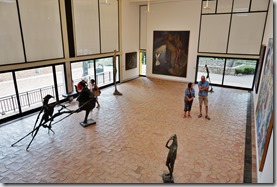 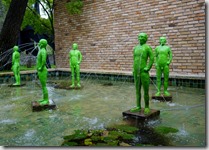 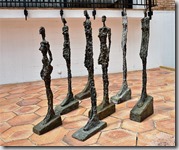 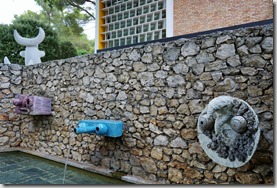 A 15 minute walk arrives at the medieval walls surrounding the village, cannon and gates still challenging entry.  There are sculptures posed along the walls and courtyards throughout the town, and galleries thick along the close streets.  Marc Chagall’s grave was intriguing, people cover the surface with coins and stones, many engraved with initials. 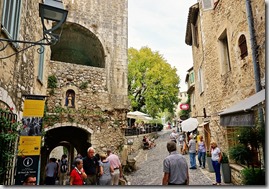 My favorite location was the17th century Chapelle des Penitents Blancs, decorated by the Belgian artist Jean-Michel Folon.  It’s done with his characteristic motifs of birds and colorful mosaics, over 1 million tiles around the altarpiece.  The central sculpture, patinated bronze titled The Source, depicts an ordinary man standing on God’s outstretched hand.  He unfortunately died in 2005, before the chapel could be completed in 2007.

We got a quick lesson in Pentanque, where metal balls are tossed / rolled to try to gain the most points coming closest to a target.  Taking turns, the strategy lies in positioning, blocking, and nudging balls around the jack. 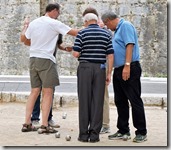 A few tries and I was doing well, but there were many more experienced players around our group, and the matches grew ever more competitive as the afternoon wore on and the beers flowed more freely.

The art and the food combine to make this a perfect getaway retreat during a trip to the French Mediterranean.  As a day trip, the best way to get up from Nice is to take a public bus:  1.50 euro from the Nice airport vs. a 65 euro taxi ride, each way.

Posted by Dave Hampton at 6:13 PM No comments: Links to this post