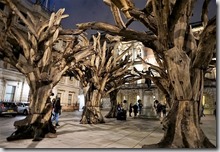 Dissident Chinese artist Ai Weiwei has a major exhibition ongoing at the Royal Academy of the Arts through mid-December.  I really like his work, he has a quirky sense of humour and a creative twist of mind in his sculpture.  This exhibit is more political than others I’ve seen, deliberately critical of government policies and unforgiving of their mistakes.

It’s a popular show, we waited in line for over an hour, so book in advance if possible.

And an acknowledgement to the curators, who allowed non-flash photography throughout the exhibition. It’s too rare at major shows in London.

The eleven installations are all worth taking time to study and to understand the backstory.  The undulating brown landscape of ‘Straight’, filling Hall 3, is made from salvaged rebar.  A 2008 earthquake in Sichuan caused the collapse of  twenty schools, killing 5000 children.  Substandard construction was blamed, and the work is  witness to the corruption and memorial to the loss.

Hall 11 holds a magnificent chandelier made from bicycles.  But there’s an irony in the use of Forever brand cycles, an everyday object now priced beyond the means of the people most likely to need it.  The ordinary is transformed to luxury, two ways. 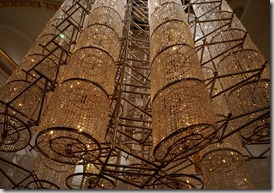 The Ton of Tea is composed of a solid cubic meter of compressed Pur Er blend of tea, ordinary reconstituted as art amidst crystal and ebony cubes.  His detention is depicted in half-sized dioramas, confinement that can only be viewed from similarly restricted perspectives.  Remnants of his studio, destroyed by the government as it opened.  Recreated vases, mirroring the antique version he destroyed. 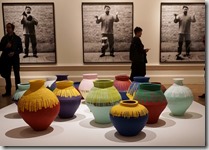 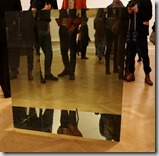 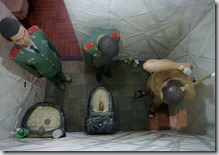 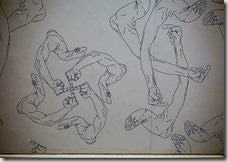 It’s a wonderful show, well worth an hours’ reflection.  Afterward, take time to cross the street to Fortnum & Mason, where the thoroughly contemporary, very serious Christmas displays are on exhibition. 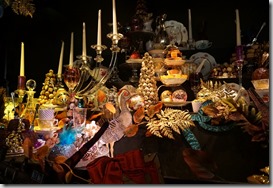 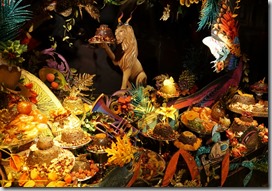 I’ll do a bit of my shopping for friends in the US there, but it, too, stands in counterpoint to Ai Weiwei’s works.

If you can’t attend, the best guide to the works on show at the RA is here.

Posted by Dave Hampton at 10:46 PM No comments: Links to this post