Picking up the pen, again

It’s been a few weeks since I last wrote here, partly because the holiday was very busy with travel, appointments, family and friends, and partly in keeping with a resolution to take the occasional complete break from work and everyday routines.

New Year’s Eve was spent somewhere over the North Atlantic, before droppping into Paris, then Amsterdam, and finally Gatwick to complete a 20-hour trip.

While travel is substantially cheaper and emptier on the 31st / 1st, it’s also solitary and disconnected on a social evening.  So, this is the last time that I’ll arrange the flights that way (‘first resolution of 2016).

The trips were uneventful: no repeat of the escaped cat that energized my flight on the trip west.  I did mange to miss some excitement at the EasyJet counter an hour before I checked in at Amsterdam, though. 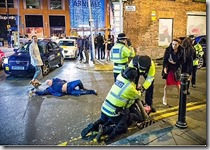 And I was far from the New Year’s scene in Manchester.  It’s a great picture that has gone viral locally as people consider it’s value  as Art rather than simply as commentary.

‘nice to be back, really.