We should have a drink in Henley.  There must be more: surely the roads do not end at Henley-on-Thames?  A shrug.  Marlow?  Well, and why not.

It’s Valentines, after all…

Marlow owes its existence to the fact that

a road once crossed a river.  In British economics, that creates an opportunity for transfer and sale of goods, and so for a village.  By 1227, there was a market in Marlow, and, in 1832, a chain bridge, a prototype for the much larger Széchenyi Chain Bridge across the  River Danube in Budapest.

Fortified with a pub-pint, we ventured

along the River Walk through the All Saints Church and along the Marlow Weir, one of the first Pound Locks with (now familiar) gates at either end and a pond between whose level could rise and fall.  (Earlier designs with a single gate were called Flash Locks).

‘not a warm day nor a crowded walk.  But it was a good outing to explore another village upstream along the Thames. 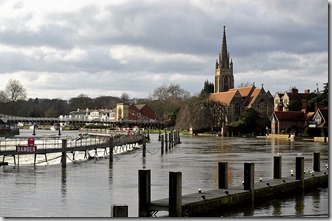 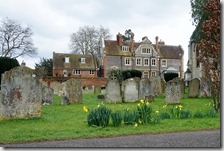 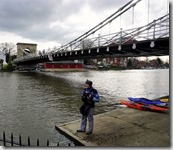 ‘And a chance to marvel that Kayakers and Snowdrops would each brave the cold conditions this time of year. 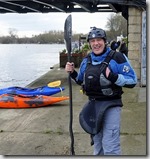 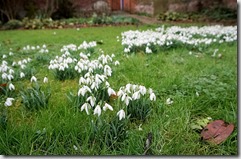 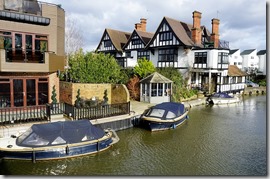