Calder and Schiffer at the Tate

At first glance, the image to the  left could be by Matisse.  It has the economy of line and the intimacy of expression that I always associate with his drawings.

But it’s actually a suspended wire-frame model by Alexander Calder, part of a special exhibition, “Performing Sculpture”, at the Tate Modern that we visited this 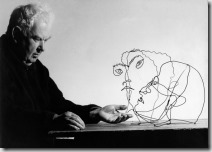 You can get a better idea of the physical wire-frame from this picture of Calder with two similar sculptures.  It’s one of a series of wire-frame models that started his career, many delightful circus acts and character studies

Around 1930, Calder visited Piet Mondriaan's studio in Paris, and became excited by the abstract squares of color, divided by geometric lines.  I thought at the time how fine it would be if everything there moved; commented Calder afterwards, though Mondrian himself did not approve of this idea at all.

Calder experimented with bringing elements out into 3-dimensional space, works with suspended and projected elements.  The earliest kinetic ‘mobiles’ were motorized kinetic versions (no longer functioning in the exhibition), and went on to create hanging sculptures, set into motion by air currents. 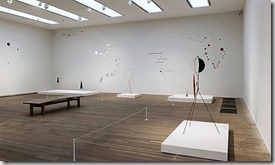 These are delightful and extensive sculptures, delicately

balanced, that fill the remainder if the exhibition.  Some have musical elements that ring as the elements collide, others play against their own shadows, shifting organic shapes and colors.

People invariably smile as they look at the exhibits: I blew furtively at several just to see them react,

swaying and bobbing. It’s easy to see why Einstein is reputed to have stood before one sculpture at MOMA for 40 minutes, waiting for it to complete a full cycle.

For myself, though, a commemorative mug 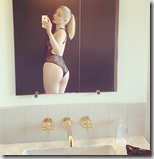 Across the hall is “Performing for the Camera”, an exploration of selfies through the ages (Amalia Ulman’s work, which is good in this context, is shown left).  ‘Loosely grouped around the theme of how people subjects interact with photographers, the works feel self-conscious rather than self-aware.  There are a lot of small photographs, the chronologic order doesn’t give much thematic grouping, and diversions into gender and identity don’t add much.

I was taken with a couple of pictures of Claudia Schiffer, however, from Vogue Germany.  She, at least, was having fun during the shoot. 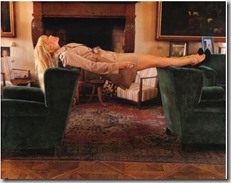