It was, first, about getting a Father’s Day gift into the mail.

My diary anticipates every birthday and holiday by two weeks, placing cards and goodies into the methodical hands of the Royal Post (UK or NL).   Trundling into town for a bit of Sunday shopping, then, I found the pedestrian mall filled with food stalls, music, and people: Eat Reading 2016. 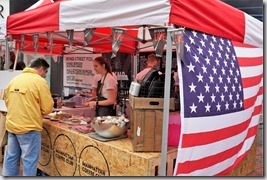 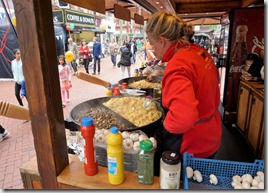 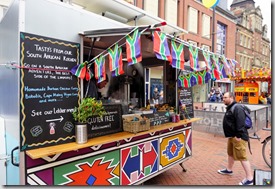 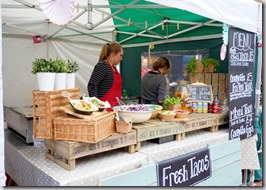 In comparison to the Chili-festivals-without-chili, this one was pretty nice: food stalls from around the world, steel-drum music on the central plaza, and a nice selection of beers from across the Continent (sampling begins at a sinful 11 am).  There was a well-decorated US / Hamburger tent, with lot of Pabst Blue Ribbon on offer, my undergrad pils of choice) and good representation from south and central america, southeast asia, and the mediterranean.  I settled in for a jerk-chicken (Jamaican) whilst my w.wezen noshed oversized soft tacos.

Ironically, the isolationist Leave campaign was heating things up alongside the inclusive Remain campaign, ahead of the June 223 vote on whether to abandon or embrace the EU (Brexit). 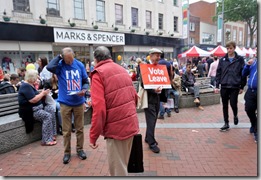 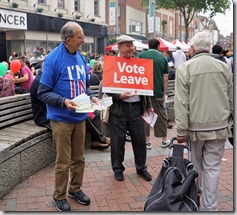 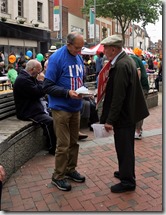 Personally, I’m in with the Remain group (although I am not allowed to vote in the referendum).  Personally, I tend towards internationalist, and think that that intermingling of peoples and cultures enriches us all.  Professionally, Brexit will create endless headaches for my business:

The UK could follow the example of Switzerland and agree to mutual recognition between UK and EU medical devices. Following the Swiss example, this mutual recognition would be on the basis of a bi-lateral agreement negotiated between the EU and the UK.

As an expat, Brexit would complicate my status in the UK whilst proscribing my ability to live elsewhere on the Continent (say, Monaco, on a yacht, after a big exit for one of the businesses).  As a traveler, I dread the border checks and residence card complications that will follow any withdrawal.

I understand and sympathize with Leave’s concerns about preserving unique culture, about the economic effects of globalization, and about the impact of immigration on small communities unable to support proper integration.  But all of these problems are more likely to be solved by engaging with the EU than by withdrawing from it.

Britain and the Netherlands both wield considerable soft power, and dissolution of the EU diminishes that global influence. Cosmopolitan and progressive examples of assimilation and tolerance set the right course for the nation and the right tone for the future.

And, on a sunny Sunday, the irony of celebrating world foods and music while withdrawing from the world stage cannot be lost on the the local electorate.

And, yes, I found a nice card and a good book to send for Father’s Day.