Well, that was unexpected…

The votes weren’t counted when we all went to bed last night,  I rolled over at first light, 4 am,  picked up the tablet, and thumbed to the Times and Guardian.

‘bad dream… I rolled back to sleep.

But it wasn’t:  Britain woke to find that they had approved a divorce from the EU.  At 8 am, the Prime Minister resigned.  By 10, it was apparent that both the government and the financial markets would be in turmoil for months to come.

I think that Cameron was clever to hand the mess back to the folks that made it, even though he’ll likely be remembered only for his ill-considered decision to hold the referendum.  It’s quickly becoming clear that the ‘Leave’ side did not expect to win, and had no plans for who would lead or what they would do if they did.  The Guardian astutely observes that this is an internecine spat among a small group elite Conservatives that has now drawn in the entire country.

I think that, having done it, they need to own it and make the best future possible, rather than argue about whether to stage a ’do-over’.  Yes, people were grossly lied to and confronted with over-emotional appeals. Quacks were given equal time with experts in the interest of  ‘balance; on the BBC.  The ‘Remain’ side never had the passion of their opponents.

But the voters aren’t stupid, and 71 percent turnout is convincing.  Many of the folks that I talk wit, progressive internationalists all, feel like the country has lost touch with their values and their common sense.  Well, as again observed by the Guardian, welcome to how the other half has seen things all along.  Globalism promised them better and delivered worse: it’s not surprising that they would plump for an alternate future given the chance. 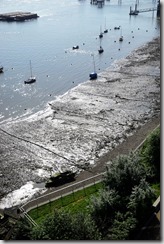 There are also a lot of sage connections being drawn between Trump and Brexit.  The belief is that dividing lines are being drawn between Us and Them, between being Local or Global.  The parties may align to either side of these new political divides, with Trump out in front.

But Trump also seems to just surf the crowds and channel their anger, somewhat as Johnson and Farage did in the UK.  I don’t know whether he has the bench strength behind hi to make real change, politicians who can form new policy rather than just articulate it.

Or, for that matter, behind Brexit.

Posted by Dave Hampton at 3:46 PM No comments:

Light along the Thames Estuary 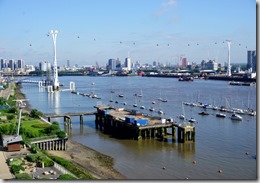 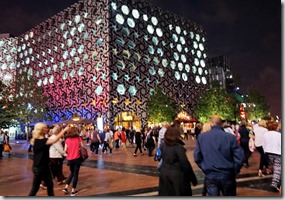 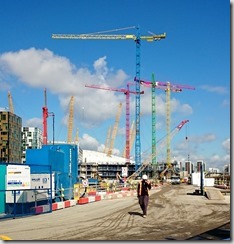 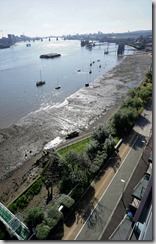 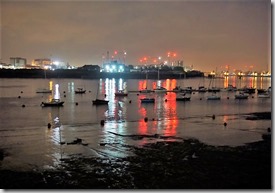 Posted by Dave Hampton at 11:13 PM No comments:

Barry at the O2 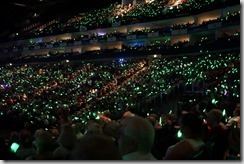 It been 40 years since I last saw Barry Manilow, lawn seating and KFC at Ravinia Park outside Chicago.  He put on a wonderful show, lots of self-depreciating banter and familiar songs that I’d played as a DJ for 91-Rock WRVU.

‘times change, but Manilow does not.

20,000of his fans filled the O2 this evening, waving glowsticks in unison and singing along with every song.  Barry sang for two solid hours without missing a beat or cutting a high note. It’s a lovely display of energy for, and happiness in, doing what he has done for all these years.  Sad ballads, nostalgic torch songs, piano bar favorites, he kept things moving and the crowd was absolutely with him.

When he swung into True Blue Miracle and Could It Be Magic, the crowd almost drowned him out with their own renditions.

When he launched into Memories from Cats, the glowsticks changed from swaying to conducting.

Barry is a bit unique in emphasizing the music, as compared to Elton John or Carole King, where the artist’s story is the first association.  I can’t tell you anything about Manilow other than that he’s a Jewish kid from Brooklyn.  I know that he wrote a lot of songs for other people, and for commercials’ (he didn’t do that medley this time around, it might not have translated to a British crowd), but otherwise all of my associations are with where I was in life when each song was playing on the radio.

It was a marvelous evening, a good crowd filling a vast arena to ‘remember the days, together.

Posted by Dave Hampton at 11:46 PM No comments:

On the road again

I think that my past six months have set a record for not traveling.  Still frenetic around the UK, my airline miles have fallen to taking only two trips in six months, unthinkable in previous years when a hundred thousand miles was the norm.

So, it was almost novel to be headed to Heathrow again, my prototype in hand, for a first visit to our corporate parent in Sweden.

It’s a good trip to be making.  I love Stockholm, it’s colorful, clean, tidy, a nice sense of history, the language similar to Dutch and lots of water and islands to contemplate.  The people that I meet are invariably capable, courteous, tolerant, modest, and happy; the food and transport is first class.  I’m looking forward to visiting more often.

But first, the ring roads.

Monday yielded torrential rains over southwest England, which led to slowings and accidents on the M25 around London.  I got an early start but made slow progress, first up to Braintree, then back down towards Heathrow.  I turned off into the inner roads near London which helped a bit, but traffic was dense along flooded streets and queueing into circles.

It’s good to practice patience and make the best use of time: I alternated between podcast lectures and business calls.  We’d like to bring people together at a new central office, need to arrange multi-center clinical evaluations, have to meet project deadlines for product samples and regulatory submissions.  So lots of my work is checking connections between people, arranging meetings and shipping, and dictating notes for online tasks for later on the computer.

It’s a bit Tyler Brûlé; it feels like I’m back in life’s fast lane.

Dropping the car into PurpleParking, I made a last check that the right things had been transferred into my carry-on, then waded into Terminal 2.   Once through screening and passport control (soon to get much worse if Brexit occurs), I looked for a place to settle in and work, but found only shopping and benches.  Airport culture is minimalist, mercantile, and aspirational, tailored to encourage consumption rather than production.  A good fit, though, to the global executives streaming through, all apart, well-tailored and intent on the next deadline.

But I need a plate of nibbles, a quiet space to work, a glass of wine, free wifi and power outlets.  A bit of exploring turns up the Plaza Premium, offering the full package for two hours for a bargain £35.  It put a solid conclusion to my workday and provided a nice meal ahead of the flight.  ‘Recommended.

It was 10 pm and still daylight when we skimmed the forests into Arlanda: midsummer night in Scandinavia.  In Copenhagen, they’d be burning straw witches and singing the traditional song at Tivoli.  The Swedes stay up late with friends and celebrate over drinks, semi-darkness only lasting a few hours before the sun rises again at 3 am.

A Kurdish taxi driver took me in to Uppsala along broad empty highways.  We made small talk about his home country and the difficulties of observing Ramadan during summer with a 20-hour fast.  The hotel was neat and trim despite being under renovation,  yielding a Spartan room a bit larger than a closet.  ‘Very different from the prior weekend.

Arthur Frommer once remarked that Americans are poor judges of European accommodations.  We have no feel for the diversity and scale of rooms on offer as compared with the consistent corporate experience of US chains.  Still, it had a cozy charm, and the city outside was lovely at twilight.

I took a walk along the river before putting final touches to my presentation and catching up with some reading.   Improbably, I’m working though Madame Bovary, assigned for my Modern and Postmodern course.  It’s a light book and I’m enjoying Flaubert's disparate visions of romantic love, characters circling one another.  But I’m getting frustrated with Emma and saddened for Charles: it’s hard to see that this can end well.

Posted by Dave Hampton at 11:23 PM No comments:

It’s a bit of a sodden day at the Bournemouth Food and Drink Festival.  With an eclectic collection of restaurants, varied music, and cooking demos, its always been one of my favorites. But this was not the festival’s best year, the weather  and the economy have left it feeling shrunken and besieged. 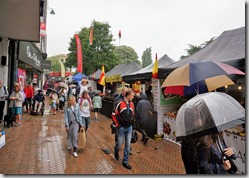 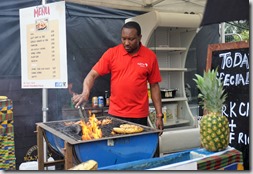 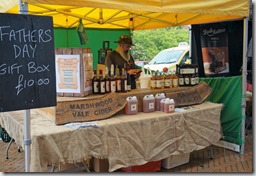 The nicest bit was a nearby art exhibition that featured watercolours and oils by local artists.  I still aspire to creating credible pen-and-wash landscapes or charcoal life drawings, and enjoy looking at the compositional and stylistic variations. 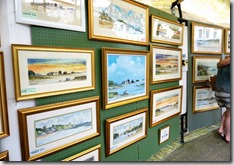 I recently attended a discussion of how photography evolves with practice.  The people who come from an artistic background tend to grow differently, and have passion for different things, than the people coming at it from a technical perspective.  Wither way, one ahs to become adept with the tool and to learn technique from mentors and structured practice and critique.  But someone studies art thinks about composition and light much differently from someone who studies technology, thinking in term of ratios and meters.

Oddly, even though I am a technologist, I come at photography from my art background.  I have taken drawing and painting classes, read widely and attended lectures, keep my Tate membership up.  I still am working through the technical course on apertures and depth of field, so the advanced controls on my camera are till to be discovered.

But I look at a lot of pictures, thinking about why one is appealing for contrast and balance, or how another captures the energy of its subject.  And I take those ideas back out  to the field as rehearsal, and try to make better photographs myself.  So, a trip to a gallery informs how I think about taking pictures, and inspires me to try different techniques.

Posted by Dave Hampton at 11:59 PM No comments:

The Nor Lye Festival

Too often, arts and culture play on a large stage, tailored for the greatest marketing appeal and the least demographic offense.  The counterbalance are the small, hyper-local events that draw creative local talent, young and evolving, to present works for their communities.  The Nor Lye festival, a play on the encircling North Leigh village, only posted on one of the What’s On calendars, only had one road sign where the dirt road entered the forest leading the the grounds. 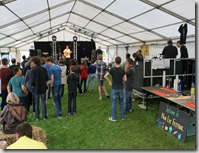 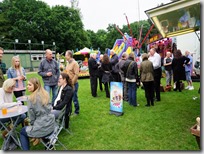 Both kid-friendly and NSW, the festival gave aspiring acts their moment of greatness, broadcast on community radio.  Most were high-school aged, some  mimicking their guitar heroes, others with a genuine artistic flair (smaller groups seemed to fare better).  And, of course, there was a brass band. 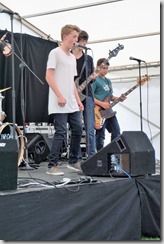 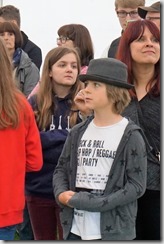 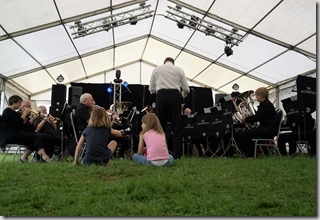 It was a bit of a game to try to pick out the parents in the audience before the performers came down off the stage: raised  tablets and handycams were only a partial ‘tell. 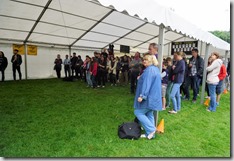 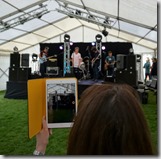 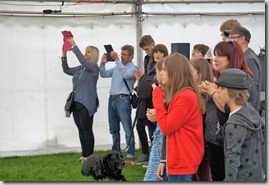 Between sets, the organizers played classic rock that kept the brightly-garbed middle—agers happy, serving craft brews and BarBQ throughout the afternoon. 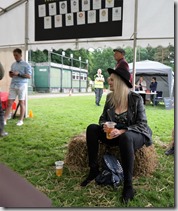 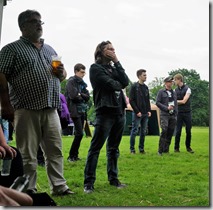 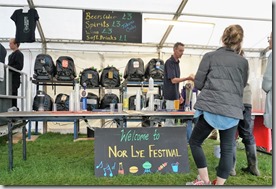 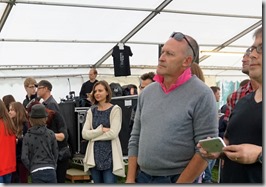 It reminded me of the Ripley Rocks gathering and others in villages across England, a bit like community sports and holiday orchestral choir pageants in the US.   ‘all good fun and individual expression for an afternoon’s relaxation.

Posted by Dave Hampton at 11:41 AM No comments: