As the summer heat finally settles in, lazy afternoons turn to picnics in the park, beer tents, and music into the twilight.  Readipop is the annual festival held at Christchurch Meadows along the Thames.  A family fun event lies outside of the ticketed areas, while paid entry gains beer tents and food stalls, music tents and the main stage.

And close-up time with the steampunk sculptures.

I credit the organizers for bringing in lots of local talent and for discounting the food and drinks to offset the entry fees.  There was a sad-song folk tent and a rockin’-loud modern tent, the worlds biggest ukulele band filling the main stage with orange and the old-geezer classic rock tent on the fringe.  The food was burgers and paella, ice cream and pulled pork; a variety of craft beers, lots of summertime Pimms and lemonade, gin and tonic.

The bands did four of five songs each before yielding to the next, just long enough to get an appreciation without wearing thin.  It was fun to pick out the entourage of each in the audience and the emcee had personal stories of each singer that he had discovered. 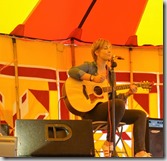 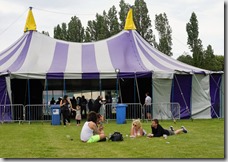 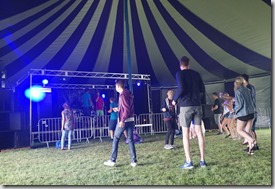 I am getting a bit hesitant to keep writing accounts of events, as they are already past when I post stories and pictures.  But lots of these come around every year, and they all give the flavour of the Great British Summer.   So I’ll keep mixing expat-entrepreneur observations with reviews of the local Feests for the time being.

Oh, and the steampunk. 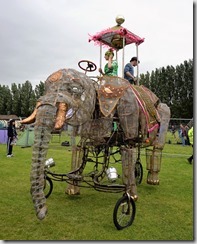 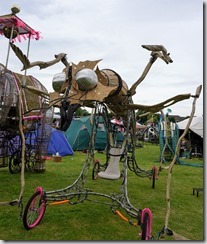 There was an encampment out by the rock tent that was creating lovely wheeled animal sculptures from metal and mesh.  Generally immense, each crowned and escorted with performers dressed as frilled clowns, decontamination squads, and deep sea divers.  The kids loved them: a lot of work and creativity that went into the whole traveling exhibition.

Posted by Dave Hampton at 12:05 AM No comments: Links to this post