Keeping up with news and ideas 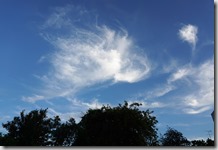 The UK and Netherlands are both fortunate to have strong public broadcast news services in the BBC and the NOS (Nederlandse Omroep Stichting).  Both are chartered to produce regular and frequent pregular and frequent public service programming, including, full and impartial news service and coverage of parliamentary debates and other national events.  Both are criticized for somewhat right-of-center coverage, and for giving legitimacy to fringe points of view in their efforts to remain unbiased.  But in general, they are my go-to sources for news and commentary when in the country.

Newspapers in both countries are private and varied: I am a Volkskrant / Guardian sort of reader, and keep up with both, each day.  While the coverage is free online and through their app, I do agree that quality independent journalism requires financial support, and so make a monthly subscriber’s contribution to each.  There’s little in the way of premium content that comes back, but I appreciate the International and cultural content that a robust newspaper provides.

Most papers are retreating behind paywalls now, a pay-to-read scheme that has gotten more difficult in the past year.  My subscription to the British news weekly The Economist is the best,providing full access to current and historical content.  My New York Times subscription gives full and historical access online or via my tablet, but requires an additional fee if I want to read on my smartphone, a pointless distinction.  The Financial Times went further, a £1/day subscription gives only limited access to the day’s contents: tiers of higher, premium subscription are needed for access to popular articles, business commentary, and more.  At the same time, they have dropped weekend columnists who I really enjoyed, and their app is  burdensome and slow.  I dropped my subscription over the summer.

The Wall Street Journal has long been pay-to-view, but made their blog pages, including the wonderful WSJExpat, free to read.  In a double hit, they have now ended publication of the blog, moving it to Facebook, and have moved the archive of posts and advice behind their paywall.  Its a senseless loss.

Beyond these  go-to publications, I try to read across a spectrum of news and opinion.  I look in on Rush and Andrew just to see how the other side is thinking (and Brietbart has been ahead on several stories that were late in getting to the Guardian or the Times).  I like the World Edition of the Atlantic and the New Yorker, and occasionally Slate, for their essays and commentary.  For thoughtful pieces, I really like Aeon and Brain Pickings: they challenge me with insights, ideas, and pointers to authors that I might otherwise miss.

Finally, when I’m in the car and n the air as much as I am, it’s hard to keep up with the written word.   Podcast fill the gap: I tend towards more conversational formats covering politics and lifestyle.  Current favorites include:

Posted by Dave Hampton at 10:25 AM No comments:

Email ThisBlogThis!Share to TwitterShare to FacebookShare to Pinterest
Labels: Expat tools, Media and Culture, US Media

I headed down to the seashore on yesterday evening around sunset, looking for a beer and  a bit of quiet to set the week aside.  Bournemouth Pier is free to wander once the summer season is over at the equinox; the beaches are less crowded and the best light comes comfortably earlier than in August.

A large, still knot of people clustered around the dry wash that the city built connecting the depleted River Bourne to the sea.  Inside the circle, a dancer wheeled around a metal sculpture, offering potted plants openings in the panels, glinting in the sunset.  Behind me the crowd parted to let a space-suited actor enter the space. 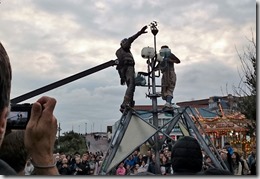 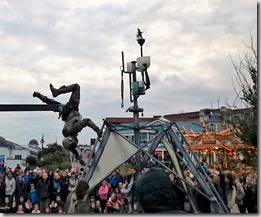 I’d forgotten that the event was on, and spent the rest of the evening wandering the various bits scattered through the Lower Gardens.  The annual event consists of sculpture and performance arts, with rotating displays and troupes through the week.

The collection of glowing blue spheres, thrumming with low-frequency music, were a crowd pleaser: the local orchestral ensemble in the Pavilion was less of a draw (people don’t like sitting on the grass when the weather gets cold).

I was fond of a brilliantly lit grove of trees, pulsing to music, halfway up the south slope of the park while the kids liked the whistling lines of illuminated boats nearby.  A torch-light parade was scheduled to kick off around ten pm, but unfortunately an hour longer than my parking meter back along the East Cliff drive.

All good fun, and still it left time to wander the pier to enjoy the wind, the waves, and the buskers, each making their own sorts of music. 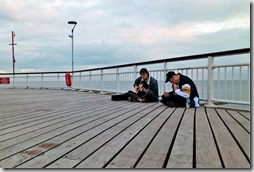 Posted by Dave Hampton at 9:34 PM No comments: