It’s been a very busy and stressed week, so my w.wezen and I decided that time off at the coast would be tonic.  We needed to make a stop southeast of London, so decided to continue on to the Southeast coast, choosing landfall at the historic community of Hastings. 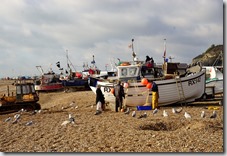 and trade villages, comprising Hastings, Hythe, Dover, Sandwich, and new Romney).  It has a famous shingle beach (actually round red stones rather than flat grey ones that I expected) and a historic pier (rebuilt after a fire in 2010). 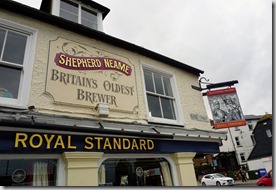 The town, and especially peripheral Rock-a-Nore are a delight.  Still infused with working fishermen and trade stalls, it is a working town that takes enormous pride in its trade and history.  The beach is lined with tall black huts that were used for drying the nets (today they sit in bags alongside the boats) and with stalls where the fishermen sell their catch.  Family diners line the main street, serving jellied eel and smoked fish. (ironically, the woman behind the counter said she’d never tried the eel so couldn’t comment; gelatinous and salty is other’s advice). 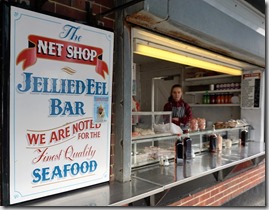 There is not a McDonalds nor Starbucks to be seen along the historic town center.  Instead there are local pubs, family B&Bs, candy-rock shops, and antique stores.  It’s really refreshing not to see the chain stores, nor too see the local tradesmen and traditions reduced to props and plays for the tourists.

The best sense of the place comes from two sites.


One is the Fishermen’s Museum, an attic of memorabilia and photographs from centuries of work.  There is an honesty to the faces and the stories, a connection to the people and the beaches, that is really rare: this is a memorial that the town has set up for itself to remember its own people. 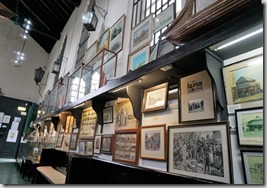 The other is the Rock-a-Nore beach itself, littered with working boats ready to put to sea.  Brighty painted and hand lettered, they are home and office to their workers.  The trim is flacking and the fittings a bit rusted, but there are people in coveralls tending and mending each boat, preparing for the next trip out.

I really like the local sense of place and continuity across generations, 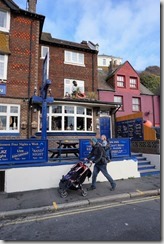 and the local pride in work and product that globalization advocates are too quick to dismiss.  One might argue that the place is economically inefficient or that the way of life may vanish: that Hastings is ripe for Something Lost.  But I see it as Something Gained: character emerging from community, and from the social foundations of work and family.

Posted by Dave Hampton at 5:00 PM No comments: 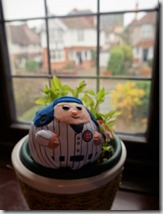 As one who grew up in Chicago, it would be impossible to overemphasize the significance of the Cubs winning the World Series this week.  Coming back from a three-game, must-win deficit after Game 4, I thought that the series was headed to another disappointment for the 100+ dry years for their true fans.  I have always been a White Sox person, truth be told, but this is the season that I could get behind my brother’s North Side team.


The win is one of a series of improbable victories lately, many fortunately, in my ballpark. 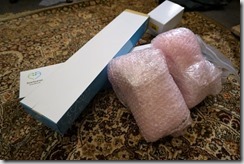 The photo to the left is one example.  It may not look like much, but there are several million pounds and years of work hidden beneath the bubble wraps.
‘back in the day, I said this would be easy.  By turns arrogant and overconfident, I was sure that I’d be in and out in three years, product approved and on market, a 30x exit at hand and a three- 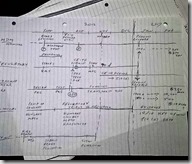 day work week of Board work and mentoring ahead.


‘time later, and product is ready.  One is entering clinic this week, patients being enrolled in validation work at a hospital near Chicago.  The other is headed to Ohio, France, and the UK for exhaustive safety testing that will last until Christmas.

I am proud of the products, grateful for the efforts of employees and the support of investors, who all made this possible.  I believe that they will help patients to have fewer complications during their hospitalization, and ensure that staff can deliver better, more cost-effective health care. 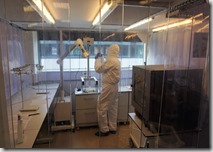 But my passion, on reflection, is for the success of competing the process.  There has been so much to do, to overcome, to learn, and to motivate.  I get satisfaction from seeing this through successfully, for being honest with employees commitment and investors money, and for persevering when things looked their darkest. 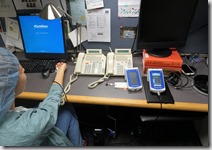 I don’t know what lessons to draw from the experience.  One of my companies, well-planned and deliberately started, never got rolling, and became a consultancy.  Another was always the underachiever, needing a push and encouragement every step along the way.  The third was the wild child, always in trouble with the banks and the law.  But that was the one that, most improbably, performed the best.

In the sports bars and hotel lobbies around Chicago, I followed the Cubs from loss to loss to win.  When I left, they needed three games.  One loss would be the end. 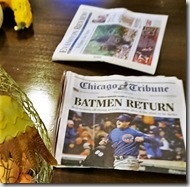 In a season of improbably wins, the Cubs took three in a row to clinch the Series.  And I pressed on through good times and lean, to introduce our products to hospital customers.

Posted by Dave Hampton at 4:55 PM No comments: 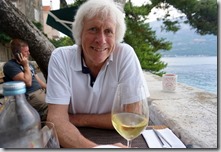 It’s been a couple of months: ‘apologies for my absence.

Everything is fine with my life, my work, and my important people.  But there has been a lot going on the past couple of months, leading to a lot of

In the middle of it all, I got a new computer and lost my camera to a month’s repair.  Cut off from two foundation tools of my blogging, the essays lapsed into scribbled notes for future posts.

Now, with everything back in hand, I’m beginning daily posts again.  ‘Bear with me, please,  while I regain my rhythm.

As always, the blog’s focus will be on my experiences of expat entrepreneurship,

tech and travel, and on stories and photographs of the people and places met along the way.   Travel still fills many of my days (a two-week stretch a month ago is logged at right), but I’m trying to see that as an opportunity rather than a block for these pages.

I remain reachable via email, on Instagram, and always for koffie/bierje along the waterfronts of the Netherlands or the UK.

‘lots to catch up on, then.  ‘Life is what happens while I am not writing about it.

Posted by Dave Hampton at 3:00 PM No comments: