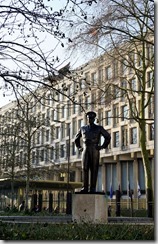 Grosvenor Square is a small park adjoining the US Embassy in Mayfair, London.  It’s been the traditional home for the official US presence in Britain since the first mission established by John Adams in 1785.  During the second world war, a military headquarters adjoined the square, and the US Naval Forces Europe continued to occupy the premises until recently.

Today, the park holds various memorials to the war and to American presidents with particular resonance for US / UK relations: Roosevelt, Eisenhower, and Reagan. 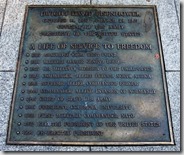 I stopped at the Eisenhower memorial after finishing my passport renewal yesterday, a casual bronze statue enclosed by a small marble circle.  The plaque set beneath details his accomplishments leading US and European troops during the war, as chancellor of Columbia University, and as two-term President.

I can’t imagine what he would make of today’s politics, or of the populist figure elected to lead the nation. 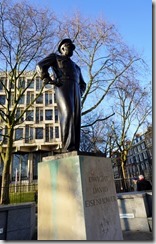 It’s an enormous change in a generation from Eisenhower to Trump, from the unity of the post-war years to divided identity politics.

The memorials across the park are meant to celebrate achievements and outstanding leaders with inspiring visions.  What statue, what plaque, could be erected to President Trump, if the first week in office is any indication?

‘not to end with too much gloom: the Dutch have posted a lovely satirical video that requests that if America’s Frist, can the Netherlands please be second? 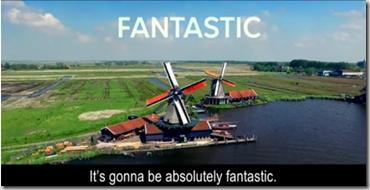 Posted by Dave Hampton at 2:09 PM No comments: Links to this post 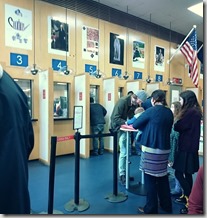 ‘You’re not going to be able to travel with this much longer,’ the Customs Agent warned, shaking his head and wagging my dog-eared passport.    The book bulged with two extra sets of pages, edges curling.  Even moreso, years of cross-border travel had filled almost every page filled with via stamps.

‘If a page falls out, we’ll have to confiscate it,’ was the final warning.

Citizens must surrender their passport in order to renew it.  That effectively

grounds me for several weeks, difficult even when things aren’t busy.  Still, nothing to be done but to do it:  I looked through the US, UK, NL web sites for Citizen Services.  Embassy – London looked like my best bet.

Arrangements for renewing and replacing are made online, no more than a month in advance. Available slots fill quickly, so I jumped on my preferred date as Christmas approached.

I hopped the early bus and train, a foggy dank start to the day with everyone huddled silent against the cold.  Train delays led to confusion at the station, with automated and live announcements giving competing accounts of the next platform.  Commuters boarded and exited with each call, vying to be the first out.  I tucked into a corner with a book.

The train met the Tube to Marble Arch, and finally a  walk down Park Lane and past La Gavroche into Mayfair where the US makes it’s home.  8:30 sharp, I was lined up outside the steel fence at Grosvenor Square, citizens to the left, foreign nationals to the right.

‘You can’t bring the laptop, the camera; we can no longer store them here either. ‘ 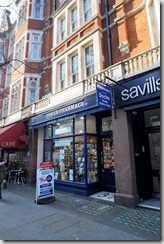 Life flourishes in overlooked ecological niches: Gould Pharmacy is one.  A small immigrant-owned drug store, it is doing a brisk business in one-hour storage of large-electronics.  Stop at the card table.at the main entrance, slip items into a bag, fill in the form, and everything was sealed up and whisked away for £3 per item.

A steady stream of harried people flowed in from the Embassy.   I bet that this service earns thousands of pounds each day doing nothing more than renting out shelf space.

‘Back in line and through the airport-style search and scan, I then made my way around the building.  The current Embassy was built in the 1950’s, a modernist design by Finnish-American architect, Eero Saarinen, who also designed St. Louis’s gateway Arch.  It’s defining feature is an 11-meter gilded eagle on the roof, guarding the main entrance.  Heavily patrolled by uniformed and plainclothes security, the narrow entry path bends between stone walls topped with curtain glass and high fences capped with cameras, before ending at a chilly marble reception desk.

I expected that ex-President Obama’s pictures would have been replaced with President Trump’s portrait, but neither man was in evidence.  Neither were the current or nominated ambassadors: framed pictures only highlighted counselor officials.  Abstract posters alternated public landscapes with founding fathers.

Attitudes ranged from brusque to irritated: papers pushed back and forth, stamps thumped onto documents, an over-the-shoulder wave towards the waiting room.

However, once in, it all proceeds pretty efficiently, documents examined and bagged, papers signed, instructions for mailing and following up in case of an emergency.  A separate cashiers window accepts cards for payment; DHL runs a shipping center in the main lobby for prepaid envelopes. ‘In and out in about 20 minutes.

And a quick stop to collect my things at Goulds.

My new passport should arrive mid-February, I’ll be limited to UK travel until then, but business can flow on in the Netherlands and I’ll back ahead of Carnival. 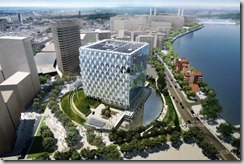 Final note: the current Embassy (Grade II listed, so it will not be demolished) is scheduled to be replaced by a new, similar building in South London in the coming years.  I don’t know about the moat, but the cube along the river looks stylish.

Posted by Dave Hampton at 10:05 PM No comments: Links to this post